Australia will be hosting the highly-anticipated ICC T20 World Cup 2022, which is scheduled to be played between October and November. The league stages will be played like the last edition as the teams have been split into two groups namely Group A and Group B. The Indian team is considered to be one of the top contenders for the mega-event despite not making it to the knock-outs in the last edition of the tournament.

Rohit Sharma will be leading the men in blue in the tournament. The team has a few questions to answer in terms of team selection before the T20 World Cup. India will be playing a plethora of games in the shortest format of the game before the tournament which includes a series against England and West Indies.

Meanwhile, Ashish Nehra, the former Indian fast bowler and the head coach of Gujarat Titans has ruled out the possibility of having Mohammed Shami in the mix for the World Cup. He believes that the marquee fast bowler is not in the current scheme of things.

Mohammed Shami last played a T20I for Team India in the T20I World Cup 2021. He did not feature in India’s squad since then. The right-arm pacer had a decent season in the Indian Premier League (IPL) in 2022.

Elaborating the same, Ashish Nehra said, “Seems like he (Mohammed Shami) doesn’t feature in the current scheme of things for the T20 World Cup. But we all know about his abilities. Even if he doesn’t play in this year’s T20 World Cup, India will definitely consider him for the 2023 World Cup at home.”

He further explained, “We don’t have many ODIs this year and Shami is on a break at the moment after the IPL. India can play him in England for the 50-over games after the Test match, You will play three ODI games against a top-quality white-ball team like England, and you would definitely love to beat them. And for that, you need your best bowlers. I would definitely take Shami in that bracket.”

Here is how the fans reacted to the comments from Ashish Nehra:

Shami is better than bhuvi with new ball in Australian condition

Shami is better than bhuvi with new ball in Australian condition

Looking for Australian conditions Shami is great option but before that selectors
want to try Youngsters so they shortlist Some of them Shami also in scheme of things there is no doubt in that..#TeamIndia #shami #t20worldcup2022

Shami have very poor record
but if shami play 10 or 11 t20 before t20 world cup and get his good rhythm then it is right to take him t20 world cup or else not take it pic.twitter.com/DQArhiIEvi

Personaly no since Buvi,Boom, harshal is there so there won't be shami in my playing 11
That means he is not fit for it there are better than him that's all

Personally i think @MdShami11 is not a complete t20i bowler. So a big no! 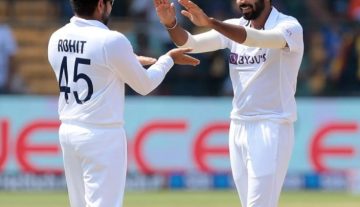