Indian openers Rohit Sharma and Shikhar Dhawan’s century knocks helped the Indian cricket team to claim another thumping nine-wicket victory (with 63 balls remaining) against the arch-rivals Pakistan at Dubai International Cricket Stadium (Dubai) in the Super Four round of the Asia Cup 2018.

Pakistan skipper Sarfraz Ahmed decided to bat first after winning the toss. The top-order batsmen failed to play big knocks as the openers Imam-ul-Haq (10) and Fakhar Zaman (31) and the no.3 batsman Babar Azam (9) were sent back to the pavilion when Pakistan was on 58 runs.

After that, the Pakistan skipper Sarfraz Ahmed and the experienced batsman Shoaib Malik rescued the team with the brilliant 107-run partnership for the fourth wicket. Sarfraz scored 44 runs off 66 balls (2 fours) while Malik scored 78 runs off 90 balls (4 fours and 2 sixes).

Later, Asif Ali also played an important knock of 30 runs off 21 balls (only four and 2 sixes) but the Indian bowlers restricted them to 237/7 at the end of 50 overs through some brilliant death over bowling.

Among the Indian bowlers, pacer Jasprit Bumrah bowled very well as his bowling figure was 10-1-29-2. Also, the two frontline spinners Yuzvendra Chahal (2/46) and Kuldeep Yadav (2/41) bagged two wickets each in that innings.

In reply, the Indian openers Rohit Sharma and Shikhar Dhawan provided the perfect start and dominated over the Pakistan bowlers. Both provided the 210-run partnership and completed their respective centuries.

Indian opener Shikhar Dhawan won the Player of the Match award for his brilliant batting in this important game.

Well done boys. What a joy to watch.Great win for us. Onwards and upwards 💪🇮🇳 #INDvPAK #AsiaCup2018

Congratulations on your 100s @ImRo45 and @SDhawan25. Such clean hitting! Always a joy to watch you both in full flow. #INDvPAK pic.twitter.com/yxzFEGtDak

Bharat !
Congratulations on a wonderful victory. Dhawan , Rohit were terrific and this is so wonderful to watch#INDvPAK

This is the first time India have beaten Pakistan by 9 wickets in an ODI match. #INDvPAK

Ton and dusted! Two massive tons that made this win look too easy! Hats off @ImRo45 and @SDhawan25 🇮🇳 💯💯 #PAKvIND #AsiaCup2018

Congratulations India 🙌
What a game!!! Absolutely Amazing & brilliant, I hope our kids (players) will learn something from this game in the future. #IndvPak

First ODI hundred against Pakistan for @ImRo45 .. Worth the wait, it’s come as a captain ! Just too good .. #IndvPak

Pakistani cricket supporters waiting for their team to arrive in Pakistan.#INDvPAK #AsiaCup2018 pic.twitter.com/Zb0XOTN34e

India against other countries

Pakistan's shaheen missile which they bragged a lot about before this match.#PAKvIND pic.twitter.com/auCBk8xyI9

Dear Pakistani Fans, if you’re feeling low, think about Shoaib Akhtar sitting in commentary who has to appreciate boundaries hit by Rohit and Dhawan holding his anger and frustration inside his heart. #PAKvIND

Rare footage of what Dhawan and Rohit told the Pakistani team before batting. #PAKvIND pic.twitter.com/JLZQijI8Vi 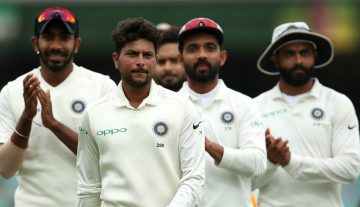