Pakistan cricket has been going through a transition phase at the moment, where Sarfaraz Ahmed was sacked from the captaincy across formats while the reigns of the Test and T20I have been handed over to Azhar Ali and Babar Azam respectively. Pakistan are all set to tour to Australia next week, for a three-match T20I series and two-Test series.

“There could be no greater honour,” Azhar Ali said. “This is an opportunity for me to leave a legacy. The amount of cricket I have played for Pakistan, the next four-five years are very important for me both as a player and a captain. The Test championship is going to start and the Australia tour too; it’s going to be tough but it’s also an opportunity.”

“Right now, we are No.7 in the (Test) rankings, so we have a fair distance to travel. The teams we’ll play in the Test Championship will almost all be higher ranked than us. So there are many challenges, but it’s also a great opportunity to play fearless, exciting cricket and get the desired results,” said Azhar Ali.

“It’s also an opportunity to give new players a chance. Unless we bring in new players we don’t know of their capability, so it’s a great chance for the youngsters to come in and perform. It could be an exciting time for Pakistan cricket,” he added.

He also talked about a change in the team that would bring positive results for them. However, Pakistan has been going through a tough phase since the ICC World Cup.

“We need to build a team culture wherein we make the right decisions under pressure and stay calm. We need to take positive options and empower players to take their own decisions when they’re in those situations. This is something that I’ve learned from my own cricket, and I’ll try to do better. We can’t tell players everything, so we should teach them to take better decisions and once that happens, the results will follow,” he added.

The new captain also believes that having Misbah-ul-Haq as the coach will be beneficial since he has played a lot of cricket in his career.

“I’ve played a lot of cricket with Misbah and under him too, so we have an understanding that has been prevalent for many years. Second, the chairman and Misbah bhai have given me the clear that I have provide most inputs,” Ali expressed.

“What’s easy in this is that earlier if you had to ask the selectors for something, you and the head coach had to decide first and then if the selectors didn’t agree, then you would struggle. But now if we make the decision then it’s as good as done given that our chief selector is our head coach as well. The problems we are facing on the ground, or me personally as a captain, he will have an idea of all that, so it will be easier.” he concluded. 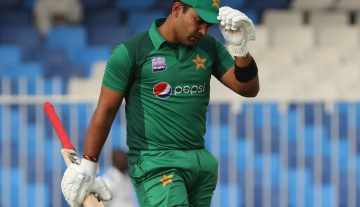 News
By CricShotsStaff - May 20, 2020
Umar Akmal Reportedly Appeals Against his Three-Year Ban