On Saturday, former Australian spinner Brad Hogg decided to share his current Test XI team. While revealing his team, The Aussie spinner decided against including the Indian skipper and went with Paksiatani’s newly appointed limited over captain Babar Azam.

Reasoning Azam’s selection, Hogg recalls Azam’s Test Hundred a few months before in Brisbane. Hogg revealed how overseas batsmen face a lot of difficulties while bat in Brisbane and how the Pakistan limited-overs captain overcame that.

“The reason why I have included Babar Azam in the lineup is that he scored a hundred against Australia in Brisbane when Pakistan toured Australia last year.  It’s very hard for overseas teams to perform on that particular wicket but he showed that he could and that is why he is one of the best players going around,”   Hogg said.

“Everyone will ask why is Virat Kohli not in this team? But if you look at his last 15 Test innings, only four times he has gone over 31 [runs]. That’s why Virat Kohli is not my Test team this year”, Hogg said.

Hogg’s Test XI consists of three Indian batsmen in the team. The 49-year-old spinner decided to have Mayank Agarwal and Rohit Sharma as his openers. Fellow Mumbaikar Ajinkya Rahane also makes it into Hogg’s line-up. India’s test specialist, Ajinkya Rahane has been in some great form during the ICC Test Championship. Indian seamer Mohammed Shami is the 4th Indian to feature in the Australian’s current Test XI. 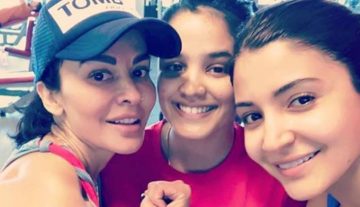