Canadian Prime Minister Justin Trudeau has been on the official visit of India, where he was invited by Indian Prime Minister Narendra Modi. He landed in India with his family on Saturday and then gave a visit to all the possible special places. In the meantime, he saw the beauty of the Taj Mahal in Agra, which is one of the seven wonders of the world. 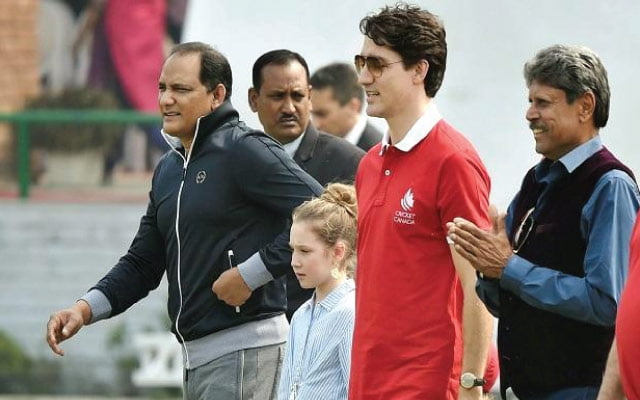 Wife Sophie Gregoire Trudeau and their three children – Ella-Grace, Xavier and Hadrien are giving him a company apart from a delegation of ministers. They were received by Minister of State for Agriculture Gajendra Singh and Indian Ambassador to Canada Vikas Swarup.

The schedule for Thursday started with the visit of Jama Masjid in Old Delhi followed by the Delhi’s Modern School cricket ground. He was companying by few former Indian cricketers over there as he had a try with cricket.

Former Indian captains Mohammad Azharuddin and Kapil Dev were present there and played cricket with Trudeau. Afterwards, he addressed to the Canada India Business Seminar.

The news agency ANI releases the photos and videos of Canadian PM, who was playing cricket along with the Indian greats.

Trudeau will meet the Indian PM Narendra Modi in New Delhi on Friday, February 23 in a bilateral meeting. The two world leaders are believed to discuss numerous key areas and agendas including trade and investment, energy, science and innovation, higher education, infrastructure development, amongst other things.

He also met with the Chief Minister of Punjab Captain Amarinder Singh during his visit to Golden Temple in Amritsar.