‘Catches win Matches’ is a jargon which has been popular in cricket for over decades now. Every time one feels that it is a statement which is given some undue emphasis, one fielder or the other, in some part of the world, proves as to why so much emphasis is given.

The helpless sight of a fielding team not earning a wicket and the opposition batsmen dominating all the bowlers is often followed by a sensational catch or a fielding effort. It is this effort by a fielder which lifts the morale of the whole team. As they commonly say ‘one brings too many’, the real value of such a fielding effort is calculated when another wicket falls due to passage created by the effort.

The beauty of fielding is that it does not discriminate among the players. A bowler, a batsman or an all-rounder, all have to take the field at the end of the day on a cricket ground. You can neither hide a fielder and nor can let a fielder sit in the dressing room for too long without any reason. This is the reason why the modern-day coaches prioritize fielding over anything else.

Watch the full video of some best catches taken on a cricket field: 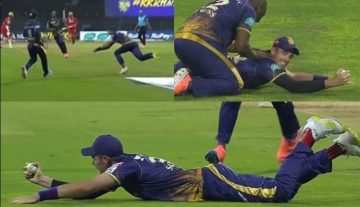