Sri Lanka captain Dinesh Chandimal has revealed that their veteran players Angelo Mathews will be seen batting at the important number four position in the first Test against India beginning here.

During the press conference on the eve of the 3-match series opener against India at the Eden Gardens, Chandimal said, “He gives us confidence as a batting unit. He will bat at number four. He has all the experience and at the top of the order and we will get maximum out of it.”

Mathews scored his last Test century in August 2015 against India itself and since then he has managed to score just 917 runs in 32 innings at 28.65 with his overall average slipping to 44.93 from 52.06. After missing the entire Pakistan tour due to a calf injury, Mathews is back in action, but only as a batsman.

Talking about the same, the Lankan skipper said, “We are looking forward to his experience. He was unbelievable in 2013-14. Hope he will put his hands up and do best. We will miss Mathews as a bowler as he gives us more confidence and can balance the side really well. Unfortunately with his injury he can’t bowl in Tests.”

Playing their first Test in India since 2009, the Islanders will also be looking to register their first ever Test win in India as they have lost 10 matches and drawn the remaining six in the country.

Speaking of the conditions at the Eden Gardens, Chandimal said, “In our last series here, we played really good against their seamers. We are confident to play on the grassy conditions and bouncy pitches. We are more than capable of playing in this kind of conditions. We need to get a good start, especially the top four and then we can continue.”

Praising the opposition, Dinesh said, “They have been outstanding. They have done a lot of hardwork, on and off the field. They are really good as a team in every format. They look really balanced. We all know India are the number one side at the moment in Tests. They have played some really good cricket last two years. It was a tough series in Sri Lanka and as a team we have learnt a lot from that time.” 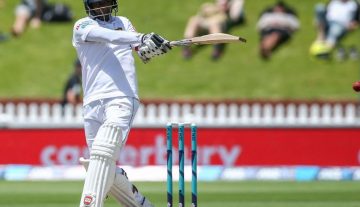 News
By SMCS - May 16, 2022
Fans react as SL players disappointed after Angelo Mathews fell for 199