Indian skipper Virat Kohli has been criticised for his recent on-field behaviours. However, the former Australian cricketer and head coach Darren Lehmann feels that Kohli hasn’t crossed the line.

During the recently concluded Perth Test that Australia won by 146 runs, the Indian skipper Virat Kohli and the Australian skipper Tim Paine were involved in verbal banters. Even the on-field umpires had to take the little intervention to stop that.

While some former cricketers have criticised the Indian skipper for his behaviour, former Australian head coach Darren Lehmann has felt that both the skippers didn’t cross their lines.

Praising Kohli’s passion for his country, Lehmann said, “Kohli is very passionate. So that’s what you get from him on the field and that’s what he will always give you. He is an excitable character. He enjoys his challengers, and he wants to win. Not only for himself, he wants his country to win. It was good to see out there and I thought it was good banter.

“Neither Kohli nor Tim Paine crossed the line. It was good banter, and it came across as a bit of fun on the stump mics.”

Lehmann had stepped down from the head coach role of the national team after their South Africa tour in March-April this year where the ball-tampering incident happened. Since then, Tim Paine is leading the Test side especially (was ODI captain too) and Lehmann has praised him for playing a good captaincy role in this tough situation.

Talking about Paine’s captaincy, Lehmann said, “Paine has been an excellent captain so far. He came out to be the leader for Australian cricket in a tough time and has done everything right, very much so. I don’t think anyone can have any criticism with Paine’s leadership.”

Also read: Tim Paine: We Are Certainly Not Going To Sit Back And Be Walked All Over

Currently, Australia is playing the four-match home Test series against the no.1 ranked Test team India. The first game of the series was played at Adelaide that India won by 31 runs while Australia won the second Test at Perth by 146 runs. While the series is currently level at 1-1 with two matches to go, Lehmann feels it will be a great series.

The former Australian head coach added, “Obviously India were the better side in Adelaide. But these two Tests have shown that it will be a great Test series. This win in Perth is a great confidence booster for the Australian team.”

Since Lehmann stepped down from the head coach role, the former Australian Test specialist opener Justin Langer has taken that role. Lehmann lauded him for reshaping the national cricket team in a good way.

Lehmann said, “For them to get a first Test win since Durban, it is obviously pleasing for Paine and Justin Langer, but for all other players and coaching staff as well. I think they will carry immense confidence going into the Boxing Day Test.”

Talking about India’s defeat in the Perth Test, Lehmann has pointed out the faulty of team combination to play with four pacers and no regular spinners. He further feels that it was a good Test and India didn’t do too much wrong during the on-field game.

Lehmann said, “Picking four pacers and not playing a spinner was where it started to go wrong for India. They didn’t do too much wrong with what they had in the game. The pitch started playing tricks from day three onwards. India will admit they didn’t make enough runs in the first innings and certainly not on par with Australia. And then Australia again scored too many runs in the second innings. So it was always going to be a tough chase on a pitch like that. Overall, it was a good Test match though.”

Lehmann was also asked whether the Indian batting was too depended on their skipper Virat Kohli or not.

The former Australian coach answered, “Well he is the best batsman in the world, so it figures. And he is so good — he makes runs all the time. Look, India always lose wickets to the new ball (openers), which hurts when you are either trying to set totals in the first innings or chase down totals in the second innings.

“They have other good batsmen — Cheteshwar Pujara is scoring runs and Ajinkya Rahane has scored runs too. More than being reliant on Kohli, it is more a case of other batsmen standing up.”

The third Test of the series will be played at Melbourne Cricket Ground (Melbourne) that will begin on December 26. Lehmann hopes a good track this time, while there was the flat track during the last year’s Boxing Day Test against England. That England Test finished as a draw game where the English opener Alastair Cook played a heroic double-century knock and remained not out on 244 runs.

Lehmann said, “I hope the Melbourne pitch has more to offer than it did for the Ashes last year. It was quite flat (against England). It is important to have a good track for the fans, especially for Boxing Day Test, and for that there should be good bounce in it.

“If they make those changes and it plays better (than last year), then I think Australia will sneak over the line (in the remaining two Tests). But it is too tight to call at the moment.” 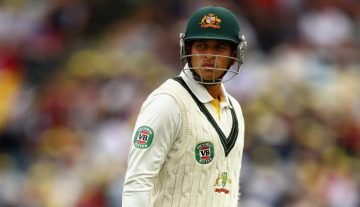 News
By Sandy - Dec 3, 2018
Usman Khawaja Has No Problem With The Uncertainty Of His Batting Position