The second match of the three-match series between New Zealand and England was played at Hagley Oval. During this match, Kiwi wicketkeeper Devon Conway pulled off an amazing fielding effort near the boundary line. Actually, Devon Conway ran about 50 meters behind the wicket to prevent the ball from going outside the boundary. The video of this incident is spreading on social media like wildfire.

This incident took place in the 12th over of Pakistan’s innings. The pair of Shabad Khan and Babar Azam was batting in the middle, while Tim Southee came to bowl for New Zealand. Shadab played a scoop shot on the fourth ball of the over. Looking at the shot from Shadab’s bat, it seemed that the batsman was sure to get the full four runs, but Devon Conway had a different plan.

The Kiwi wicketkeeper showed amazing commitment and ran for almost 50 meters to stop the ball before going for the boundary. During this incident, Conway put up an amazing dive to prevent the ball from touching the boundary rope with his feet. Seeing this amazing effort, all the spectators present on the field were completely surprised. Commentators also praised Conway for his brilliant effort.

Here is the video of the effort from Devon Conway:

Earlier in the match, New Zealand decided to bat first after winning the toss, after which the team scored 147 runs on the basis of the innings of Devon Conway (36), Mark Chapman (32), and skipper Kane Williamson (31). To win this match, Pakistan had to chase a target of 148 runs. On the basis of Babar Azam’s innings of 79 runs, Pakistan managed to chase down the score in 18.2 overs. 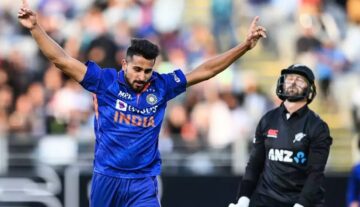