An over-rate suspension will force the Sri Lankan skipper Dinesh Chandimal to miss Sri Lanka’s last two final league matches in the Nidahas Trophy. Match referee Chris Broad forced a two-match ban on Sri Lanka’s skipper and fined the team’s players 60% of their match fee, after ruling that the side fell four overs short of their target during their match against Bangladesh on Saturday.

The allrounder Thisara Perera will lead the Sri Lankan team in Chandimal’s absence. Meanwhile, Bangladesh captain Mahmudullah has been fined 20% of his match fee, and the rest of the team 10%, after the team was ruled to have fallen one over short of the time target.

The team’s captain, however, receives two suspension points, which compares to a ban from one Test or two ODIs/T20Is, depending on what comes first for the player. If Sri Lanka is found guilty of another offense of similar nature in a T20I in the next 12 months with Chandimal as skipper, he will receive between two and eight suspension points. 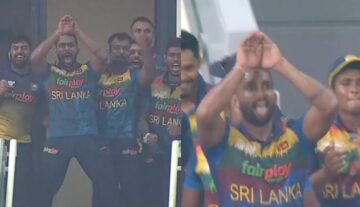