The Tennis legend, Roger Federer is leading the 2020 Forbes magazine list of highest-paid global athletes announced Friday, leading the lineup for the first time with pre-tax earnings of $106.3 million (95.5 million euros). The Indian skipper, Virat Kohli remains the only cricketer in the list rising to 66th position from being 100th in 2019. The Swiss tennis legend becomes the first Tennis player to lead the annual list since its 1990 debut, rising from fifth in 2019.

Federer’s haul over the past 12 months included $100 million from appearances fees and endorsement deals plus $6.3 million in prize money. His previous best showing was second in 2013.

The ongoing coronavirus pandemic that shut down sports worldwide caused the first decline since 2016 in the total income of the world’s 100 top-paid athletes, a 9% dip from last year to $3.6 billion. Another plunge is expected next year from the shutdown.

Portuguese football star Cristiano Ronaldo was second on the list at $105 million, $60 million in salary, and $45 million from endorsements, followed by Argentine football stalwart Lionel Messi third on $104 million, $32 million of that from sponsorship deals.

Messi and Ronaldo, who have traded the top spot three of the past four years, saw their combined incomes dip $28 million from last year due to salary cuts when European clubs halted play in March.

As for cricket, it is among those sports which have been hugely impacted because of the Coronavirus pandemic. Kohli’s earnings in 2019-20 grew only by 1 million USD after he had fetched USD 25 million last year. The Indian skipper gets retention of USD 1 million from the Board of Control for Cricket in India annually. He is among three cricketers in the top bracket of the Indian cricket board’s paygrade.

Prize money from different series roughly contributes USD 1 million to Kohli’s earnings. This category may include awards like Man of the Match, Man of the Series, etc. He is one of the highest-paid celebrities in India with endorsements from brands like Audi, Colgate-Palmolive, Flipkart, Google, Hero Motocorp, Puma, Uber, Valvoline, and more. As per Forbes, he earns a total of USD 24 million through endorsements only.

Kohli has a stunning social media following of 134 million on Twitter, Facebook, and Instagram which contribute heavily towards him fetching some of the most lucrative brand endorsements in India. 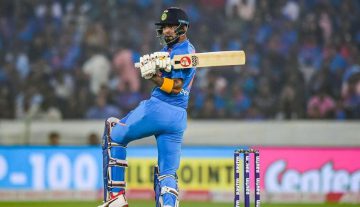 News
By CricShots - Dec 7, 2019
KL Rahul Looking Forward To Making Use Of The Opportunity