Asad Rauf has often been touted as one of the finest umpires of his time. He joined the ICC elite panel in 2006 a year after officiating his first Test. Along with Aleem Dar, he was a well-liked personality on the circuit who contributed to enhancing the standing of Pakistani umpires prior to the neutral umpire era.

Rauf played for National Bank and Railways during his prolonged first-class career as a middle-order batter, averaging 28.76 from 71 first-class batters. Pakistani wicket keeper-batter Kamran Akmal took to Twitter to convey his condolences. “Sad to know about the news of former ICC umpire Asad Rauf’s demise,” he wrote on his Twitter handle.

Sad to know about the news of former ICC umpire Asad Rauf’s demise…May Allah grant him magfirat and give his family sabr Ameen 🤲🏻🤲🏻 pic.twitter.com/VyplFGX6gT

Rauf’s career was ruined by charges of spot-fixing and match-fixing in cricket games, and in February 2016 he received a five-year suspension after being found guilty of corruption as well as embroiled in a sex scandal.

Asad Rauf garnered a lot of attention earlier this year when a video of him selling shoes at Pakistan’s famous Landa Bazaar went viral. Rauf mentioned that 10 years after standing in his final ODI, he has lost interest in cricket and now wants to excel in his new role.

“This isn’t for me, this is the daily wages of my staff, I work for them. I’ve umpired in so many games all my life, there’s no one left to see now. I haven’t been in touch with the game since 2013, because once I leave something I leave it completely,” Rauf had said in a recent interview to a Pakistani news channel, Paktv.tv back in June. 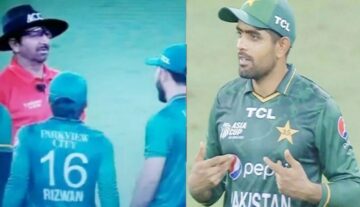 Videos
By CricShots - Sep 10, 2022
Babar Azam Got Angry At The Umpire For Taking DRS Without Confirmation From The Captain