Former Australian opener Matthew Hayden reckons that his fellow countryman Marcus Stoinis is a better performer as compared to his Indian counterpart Hardik Pandya. Hayden’s comment comes just days before the upcoming T20I series between the two countries. In an otherwise dismal 2018 for Australia, Stoinis did manage to prove his worth.

However, in recent times, Stoinis has been Australia’s most consistent performers last year when the reigning world champions managed to win just two matches in ODIs. Unsurprisingly, he was the only Australian to play every single ODI Australia played last year. He was their third-top run-getter with 376 runs, scoring four fifties with a top score of 87.

Apart from his batting, Marcus was also Australia’s leading ODI wicket-taker with 13 wickets from as many matches, at an average of 36.77 and fittingly won the Australian ODI player of the year award as well.

On the other hand, Hardik had an average sort of 2018 as he started the year with 93 in the Cape Town Test, picked up five wickets in the third Test against England in addition to scoring a half-century as well. However, Hayden feels the India star is still behind Stoinis.

Recently, in an interview, Hayden said, “Marcus Stoinis is developing into a world-class all-rounder. He is unlucky not to be playing a little bit more Test cricket. He has quality in his play, although Hardik is also a fine player. Stoinis has adopted a wider approach to his game which is winning matches for his country. Hardik Pandya also has the same responsibility, but I think right now Stoinis is a better player.”

Hayden further suggested that the in-form pacer Pat Cummins will produce some serious threat to the Indian opener, Shikhar Dhawan. Cummins will be brimming with confidence after a successful last year that concluded with him winning the prestigious Allan Border medal.

Cummins was also Australia’s most impressive performer when India toured Down Under for the Test series. Recently, he also bagged the Man of the Series award against Sri Lanka before becoming the first Australian since Glenn McGrath to rise to the top of the ICC Test bowlers’ rankings.

On the other hand, Dhawan has looked good in bits and parts. He has been getting the starts but has been unable to convert them into something big. Perhaps this is the reason, Hayden feels Dhawan will be troubled by Cummins. He said, “Pat Cummins will have the hold on Shikhar Dhawan. Dhawan loves the pace and I think Pat holds the armory with the short ball, reverse swing and the variation with slow balls. I think Patty will be the babysitter.” 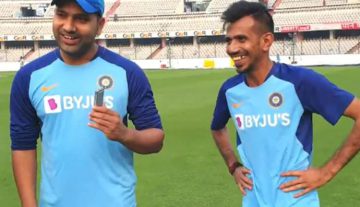 Social Shots
By CricShots - Dec 10, 2019
WATCH – Rohit Promises Chahal To Take Him On A Dinner