The Australian skipper, Aaron Finch made the correct call at the toss again in the second ODI against India as Australia elected to bowl first at the Vidarbha Cricket Association (VCA) Stadium in Nagpur. The dryness of the surface, Finch felt, would help give their bowlers a slight edge while chasing. On the other hand, the Indian skipper Virat Kohli felt the exact opposite, saying the pitch will deteriorate further in the second innings and batting first would’ve been a no brainer for him.

While, the Indian skipper, Virat Kohli decided not to make any changes in the squad, the visitors have made a couple of changes to their playing XI as Nathan Lyon and Shaun Marsh have come in place of Jason Behrendorff and Ashton Turner. India currently leads the ongoing five-match series as they had won the first match by six wickets.

Australia had a dream start to the game when the fiery pacer Pat Cummins provided the breakthrough in the first over of the match itself. It was the last ball of the opening over when India’s deputy skipper Rohit Sharma went for the short and wide ball outside the off-stump only to be caught by Adam Zampa. After that, Shikhar Dhawan also got out in the first powerplay itself.

However, Kohli and Ambati Rayudu did make a 37-run partnership for the third wicket then after Rayudu’s dismissal in the 17th over, Vijay Shankar (46) added 81 runs with Virat for the fourth wicket before facing an unlucky dismissal in the 29th over and his wicket turn the game around for India as they were then reeling at 171/6 after the 33rd over as the heroes of the last match MS Dhoni and Kedar Jadhav got dismissed on back-to-back deliveries.

However, with the help of Kohli’s (116) 40th ODI century and a 67-run partnership between Kohli and Ravindra Jadeja for the 7th wicket, India managed to reach the total of 250 before getting bundled out in the 49th over.

Here is how Twitterati reacted after India’s poor batting display:

5th ODI vs NZ: Got run out for 45 When he looked really good.

2nd ODI vs Aus: Got run out for 46 When he looked really good.

Stand up and applaud. The Run Machine brings up his 40th ODI Century 👏👏

Early signs that @imVkohli looks in the mood … !! #INDvAUS

Without Dhoni at the other end, Jadhav falls early.

Without Jadhav at the other end, Dhoni falls even earlier.#IndvAus

It's his seventh against Australia! 👏 #INDvAUS pic.twitter.com/hmuW9qt9D8

Virat Kohli is only the 6th player to score 9000 runs in International cricket as captain and the Quickest to get there – in 159 innings.

Top innings. Another day at work. Century for Virat Kohli. 40 in 224 innings is an unreal stat.

Anushka must be so used to Kohli's batting by now that she'd be like "Suno, century ho jaye to aate huye 2 kilo aaloo le aana!"

Bit disconcerting if you are a batsman batting either side of Dhoni. Applause for the outgoing Rayudu (thinking Dhoni would come in) and complete silence when it turned out to be Vijay Shankar!

Undortunate end to Vijay Shankar’s innings. But he’s been very impressive today, which wouldn’t have been lost on his partner and captain 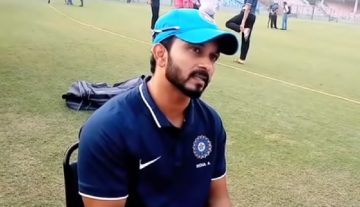 Article
By CricShots - Oct 26, 2018
Kedar Jadhav No Idea Why He Got Excluded