London, Indian skipper Mithali Raj on Wednesday said their first target is to reach the semi-finals of the Women’s cricket World Cup, starting from June 24 here.

Mithali revealed the importance of the quadrangular Series in South Africa last month and said the team would like to carry forward the same momentum in the International Cricket Council (ICC) event also.

“Our first target will be to reach the semi-finals, but for that you need to be able to play good cricket throughout the tournament and have good momentum,” Mithali was quoted on ICC’s official website as saying.

“For me, the Quadrangular Series was fantastic — we played very convincingly and as a team we performed really well. We’re looking to produce the same kind of performance over here.”

“The conditions there (South Africa) are completely different to what we are facing here in England. We can take a lot of confidence, but we need to start fresh again in the World Cup,” she added.

This World Cup will be the eleventh edition and the third to be held in England (after the 1973 and 1993 tournaments). Eight teams qualified to participate in the tournament.

The 34-year-old batswoman also said the bowlers have to pitch in the right areas because the conditions here might play a crucial role.

Indian eves finished seventh in the previous edition of the World Cup, but this time, Mithali-led India are eyeing the title with a much improved performance. 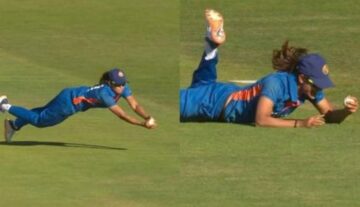 Videos
By CricShots - Sep 15, 2022
Radha Yadav Takes A Stunning Catch In The Second T20 Against England