On Wednesday, the dead-rubber game between India and Afghanistan turned out to be one of the most interesting matches in the Asia Cup 2018 till now, there were a lot of emotional scenes were captured at the Dubai International Stadium. A lively performance from Afghanistan saw them bowl India out for 252 as the match ended in a thrilling tie. However, the fates of both the teams had already been decided before the game as the Indian team has already qualified for the final while Afghanistan bowed out of the competition.

However, it was still similar to a loss for Team India as they couldn’t get over the line even after a valiant effort from the KL Rahul, Ambati Rayudu and Ravindra Jadeja. Team India fans were left extremely disappointed as they saw Rashid Khan dismiss Jadeja in the final over to trigger massive celebrations in the Afghan camp.

With 1 run needed off 2 balls, Jadeja mistimed a pull shot and the ball went straight up in the air only to be caught by Najibullah Zadran, who was running in from the deep on the leg side. The result of the match left a young Indian fan in tears who was hoping for an Indian victory. His father tried to console him but to no avail, as the kid couldn’t hold back his tears even after appearing on the big television screen on the ground.

Replying to Bhajji’s tweet, that kid’s father, Amarpreet Singh wrote: @harbhajan_singh Paaji he is happy now and looking forward to the final on Friday… Really kind of @BhuviOfficial as well to call and console him… We will surely bounce back and it will be our “Fateh” on Friday 😊🇮🇳 Go Team India @BCCI”.

@harbhajan_singh Paaji he is happy now and looking forward to the final on Friday… Really kind of @BhuviOfficial as well to call and console him… We will surely bounce back and it will be our "Fateh" on Friday 😊🇮🇳 Go Team India @BCCI pic.twitter.com/BPkBXO2hIv

The cameraman captured the kid crying dejectedly after the match ended. But when the cricketers were leaving for the hotel, Rashid Khan and Mohammad Shahzad were seen clicking selfies along with the same kid who was happy about the same. It was a great gesture from them as it gives the perfect testimony of the strong cricketing relations between India and Afghanistan.

After watching the kid cry, one of the Twitter handles also wrote that If it were Bollywood that kid could’ve become best Indian spinner after 15 years and dismissed the whole Afghanistan team for a duck. Replying to the same, that kid’s father replied by posting a video of the young fan training in MS Dhoni’s academy in Dubai. Here is the tweet:

He is currently training at MS Dhoni Cricket Academy in Dubai… Your wishes will come true one day… If not bowling, he will surely wrap up the match with a clean hit 😄🇮🇳 @msdhoni @pacific_club pic.twitter.com/p2frCYMBXP

Mohammad Shahzad’s heroic 116-ball 124 had helped Afghanistan set India a challenging 253 but KL Rahul and Ambati Rayudu’s solid start made sure that despite a stutter in the final, India were in for a victory, almost. They needed one run off two deliveries, Rashid bowled a short ball and Jadeja mistimed the shot to send the ball straight into the hands of the only fielder in the deep and the match ended in a tie.

This little kid crying after the match gets tied has to be the cutest moment of the day 😭❤️ #INDvAFG pic.twitter.com/dXXMW7q6Xf

I could see my dad and myself in the picture (years ago) #INDvAFG pic.twitter.com/49g9d9Fow0

Feeling bad for this boy, but he can't fathom the beauty of what he has witnessed today! This match will be remembered for ages! What a cliffhanger! #INDvAFG pic.twitter.com/fVXqQHHNbo 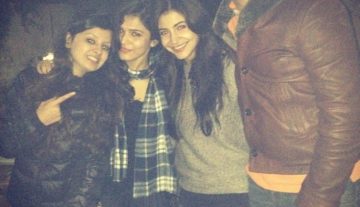 News
By Aditya Pratap - Feb 3, 2019
Did You Know? Anushka Sharma and Sakshi Dhoni Were schoolmates In Childhood