The third playoffs match of the ongoing 11th edition of the Indian Premier League (IPL) is scheduled to be played between Kolkata Knight Riders (KKR) and Sunrisers Hyderabad (SRH) in Kolkata. Both the teams have had a contrasting journey in the league stages of the season. While KKR started the tournament in the high then lost the momentum in the middle then again got back to the winning ways, SRh had been pretty consistent in winning post of their league games of IPL 2018, but they have lost their last three out of three games and that will a crucial factor in his match as well. The winner of this match will lock horns with Chennai Super Kings (CSK) in the Final at Wankhede Stadium, Mumbai.

However, in terms of the winning momentum, KKR defeated Rajasthan Royals (RR) in the eliminator on Wednesday, while on the previous day, SRH lost the first qualifier to Chennai Super Kings (CSK) in Mumbai. Here are the probable playing XIs –

SRH are confirmed in the playoffs at the number one position. However, they have lost there as three games which also included the first qualifier against CSK. In their last match was against CSK, they lost defending a decent total in Mumbai. The good part of those lost matches was that was that they came really close to the target with Williamson in super form and also, Manish Pandey’s return to form will make them happy.

In the match against CSK, SRH dropped Basil Thampi and replaced him with Bhuvneshwar Kumar as the former recorded worst IPL bowling figures. SRH is likely to play with the same squad in the second qualifier as well.

In the last match against Rajasthan Royals (RR), Kolkata team was very clinical. Piyush Chawla recorded one of his best figures of the season with a match-winning spell of 2/2s. Dinesh Karthik helped them to put up a match-winning score of 169 with the help of some powerful exploits from Andre Russell in the death.

In the last league game against SRH, Shivam Mavi was replaced by Prasidh Krishna and he bowled beautifully in the match by taking four wickets out of which he took 3 in the final over of the innings. Now, it will be interesting to see of Mavi gets back into the squad for not who was dropped from the eliminator as well 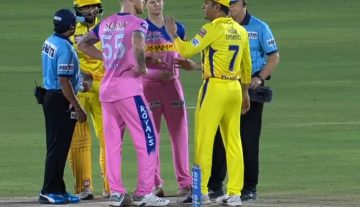 News
By CricShots - May 11, 2020
Mitchell Santner Recalled When MS Dhoni Fought With Umpires