Kolkata Knight Riders (KKR) are now become the table-toppers in the 12th edition of the Indian Premier League (IPL) by defeating Rajasthan Royals (RR) at the Sawai Mansingh Stadium in Jaipur by 8 wickets. KKR has surpassed the Chennai Super Kings (CSK) on the points table. Meanwhile, the Royals lost their fourth game and kept languishing in the bottom half of the table.

The pitch was sluggish and the batsmen were finding it difficult to score runs in the first innings as Royals only managed to reach the total of 139/3 in their 20 overs. Their start wasn’t great as Prasidh Krishna drew the first blood by dismissing Ajinkya Rahane for five runs in the second over. Then Jos Buttler and Steve Smith made a partnership of 72 runs, though they scored it in 64 balls, taking their own time.

Buttler wasn’t at his fluent best and could only score 37 runs from 34 deliveries with five boundaries and one over-boundary. The likes of Rahul Tripathi and Ben Stokes found the going tough. At the other end, Smith looked calm and composed. He amassed a fifty in 44 balls and remained unbeaten on 73 runs from 59 balls with seven fours and a six. Harry Gurney was the pick of the KKR bowlers with two wickets.

Chris Lynn and Sunil Narine had no problems while chasing the target. They started smocking the RR bowlers from the word go and put on 91 for the opening wicket in 51 balls to make a game a dominating one for KKR. The Royals’ fielding was also a bit sloppy as Rahul Tripathi dropped a simple chance of Narine in the third over. The unlucky bowler was Dhawal Kulkarni, who even produced a chance in the next ball.

An inswinger from him smacked into the stumps of Lynn and the lights flashed as well, but the bails didn’t get dislodged. Kulkarni and Rahane showed displeasure after the incident. Lynn got out after scoring 50 runs from 32 balls with six fours and three sixes. Narine raced away to a 25-ball 47 and helped KKR utilize the powerplay. The visitors eventually got over the line with 37 balls to spare.

Here is how Twitter praised KKR for a dominating win:

Just another regular top performance by @KKRiders. An early finish this IPL looked a rare sight but good to have one, some one in the @rajasthanroyals need to support Shreyas Gopal.#RRvKKR

I believe KKR have found a long term seam solution in Harry Gurney.#KKR.

Bowlers who bowl Googly a lot more than leg-spin should be termed a ‘Googly bowler’ and not a leg-spinner. What say? Stock delivery should define the bowler not the variation…. #IPL

Simple rule change … If the Zinger bails are going be used which I like .. If the Ball hits the stumps and the Bail lights up then it must be OUT … We can’t be having Bowlers Bowl a Batsman out then the bails not to come off but the Zingers be flashing .. #IPL2019

Although cricket is an unpredictable game but @KKRiders should pass through this easily. @stevesmith49 amongst the runs is a good sign for @rajasthanroyals #RRvKKR

Will we get to see a repeat of yesterday's game ? Will need a special effort like that of Alzarri Joseph's #RRvKKR 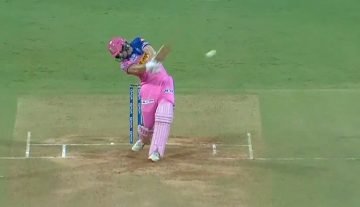