The Rajasthan Royals (RR) were in the search of their second win of the ongoing 12th edition of the Indian Premier League (IPL) against the Kolkata Knight Riders (KKR) at the Sawai Mansingh Stadium in Jaipur, but they failed miserably. After winning the toss, the KKR skipper, Dinesh Karthik decided to bowl first citing the windy condition in Jaipur. However, the hosts lost the game by 8 wickets and 37 balls to spare.

During the chase, the KKR openers Chris Lynn and Sunil Narine gave them a fiery start as they smashed 36 runs in the first three overs itself. However, on the first two bowls of the 4th over bowled by Dhawan Kulkarni, both the openers got a lifeline each. After those lifelines, both of them added 91 runs for opening wicket before Narine getting dismissed in the 9th over.

However, despite the dismissal, Lynn kept on smashing as one of the sixes landed on the front glass of the promotional SUV standing in the stadium. After the shot, Lynn got out in the penultimate ball of the same over. After his dismissal, Shubman Gill and Robin Uthappa carried forward the momentum and helped KKR to get over the line with 8 wickets and more than six overs to spell. 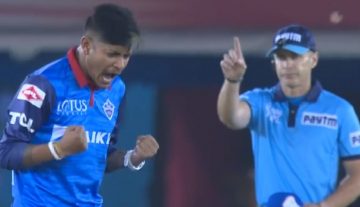