The Kings XI Punjab (KXIP) have literally blown away the Royal Challengers Bangalore (RCB) in the sixth match 6 of the Indian Premier League (IPL).  It was KL Rahul all the way through the game after he lost the toss and was invited to bat first. Despite the fact that none of the other batsmen came close to his level of batting, KXIP’s run-rate never dipped all thanks to their skipper.

Mayank Agarwal looked decent once again played a steady knock of 26 before getting out to Yuzvendra Chahal. Nicholas Pooran walked in at three only to give away his wicket to Shivam Dube as he scored just 17 off 18 balls. But even then, the run-rate was well above 8 due to KL Rahul who was literally toying with the RCB bowling.

The number five Karun Nair turned out to be lucky as he got the best seat in the house to watch one of the best IPL innings ever. To make things worse, Virat Kohli dropped his counterpart twice and Rahul made sure RBb pay for it big. Dale Steyn and Shivam Dube had to face the wrath as KXIP scored 49 runs. Rahul, in the process, surpassed the three-figure mark and ended up unbeaten on 132 off just 69 balls and KXIP reached a mammoth total of 206 runs for the loss of just three wickets with only Chahal doing well for RCB.

During the chase, RCB came down to 5/3 in the first three overs itself as they lost the wickets of Devdutt Padikkal, Kohli, and Joshua Phillippe. However, they never managed to stay in the chase despite the AB de Villiers and Aaron Finch who was dismissed by M Ashwin and Ravi Bishnoi respectively.

Eventually, RCB lost the match by a huge margin of 97 runs as they were bundled out for 109 in 17 overs. For KXIP, Bishnoi and Aswin took three wickets each while, Sheldon Cottrell got a couple, and Mohammed Shami and Glenn Maxwell took a wicket each.

KL did not take long to make a comeback as the highest-ranked Indian T20I batsman scored his first ton as captain. He remained unbeaten on 132 off just 69 balls. He surpassed the three-figure mark off 62 balls in the 19th over of Kings XI Punjab’s innings bowled by veteran Dale Steyn. His knock of 132 runs also helped him become the captain with the highest score in IPL.

The young Ravi Bishnoi got priced wickets of Aaron Finch, Washington Sundar, and Umesh Yadav. He conceded just 32 runs in his spell of four overs.

The young Murugan Ashwin got priced wickets of Ab de Villiers, Navdeep Saini, and Yuzvendra Chahal. He conceded just 21 runs in his spell of three overs.

Virat Kohli had a forgettable day at the field and would be looking to make a strong comeback as quickly as possible. He dropped KXIP skipper, KL Rahul twice and the latter made sure that RCB pays for it as he was dropped he was playing at the scores of 83 and 89 and then he amassed 132 off just 69 balls. he RCB captain managed to score just 1 before being sent back by Sheldon Cottrell.

Joshua Philipe who is known for his hard-hitting batting skills had failed in the second consecutive games as he got out on a duck. 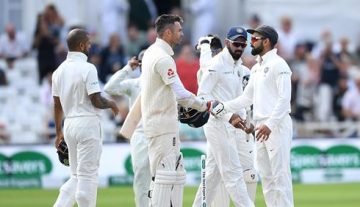