During the sixth match of the Indian Premier League (IPL) 2020 between Kings XI Punjab (KXIP) and Royal Challengers Bangalore (RCB) nothing was working out for Virat Kohli. He had a forgettable day at the field and would be looking to make a strong comeback as quickly as possible. He dropped KXIP skipper, KL Rahul twice and the latter made sure that RCB pays for it as he was dropped he was playing at the scores of 83 and 89 and then he amassed 132 off just 69 balls.

KL Rahul batted all the 20 overs over of the innings and smashed 14 fours and seven sixes. After being dropped by Virat Kohli, Rahul smashed 42 runs from just 9 balls. In the 19th over, he smashed Dale Steyn for 26 runs before ending the innings by hitting Shivam Dube for four and two sixes on the final three balls.

Riding on Rahul’s knock, the Punjab-based franchise reached a humongous total of 206 for 3 in the allotted 20 overs. As if those twin drops were not enough, Virat Kohli failed with the bat as well. The RCB captain managed to score just 1 before being sent back by Sheldon Cottrell.

And as Virat Kohli was struggling on the field, he was being brutally trolled on Twitter for his two dropped catches and for his batting failure. During the chase, RCB came down to 5/3 in the first three overs itself as they lost the wickets of Devdutt Padikkal, Kohli, and Joshua Phillippe. However, they never managed to stay in the chase despite the AB de Villiers and Aaron Finch who was dismissed by M Ashwin and Ravi Bishnoi respectively.

ALSO READ: Kevin Pietersen Takes A Dig At Virat Kohli Over His Workout

Eventually, RCB lost the match by a huge margin of 97 runs as they were bundled out for 109 in 17 overs. The cricket fans did not waste the rare opportunity of trolling the batting superstar. Here are some of the reactions:

Virat Kohli is the best fielder of India

Virat Kohli next time trying to slander his players for dropping catches but realises he dropped twice…. pic.twitter.com/61iSFZuW5Q

*Kohli drops 2 catches in a match*

Kohli dropped easy catch, and proved, you need abs for modeling only. #RCBvKXIP

Kohli dropped more catches than the runs he made today… sorry 😂

People to Kohli after dropping two catches and getting out soon : #KXIPvsRCB pic.twitter.com/hJt5Y9My7N

#KXIPvsRCB
Everyone praised #Kohli for his fielding.
Meanwhile Kohli in today's match: pic.twitter.com/sVotZkRfZh 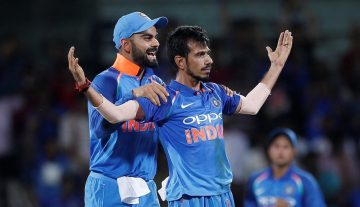 Social Shots
By CricShots - Jul 8, 2020
Chahal Demands Biryani From Kohli After Getting Dosa From Iyer