The Kings XI Punjab (KXIP) have literally blown away the Royal Challengers Bangalore (RCB) in the sixth match 6 of the Indian Premier League (IPL).  It was KL Rahul all the way through the game after he lost the toss and was invited to bat first. Despite the fact that none of the other batsmen came close to his level of batting, KXIP’s run-rate never dipped all thanks to their skipper.

Mayank Agarwal looked decent once again played a steady knock of 26 before getting out to Yuzvendra Chahal. Nicholas Pooran walked in at three only to give away his wicket to Shivam Dube as he scored just 17 off 18 balls. But even then, the run-rate was well above 8 due to KL Rahul who was literally toying with the RCB bowling.

Glenn Maxwell witnessed another failure at no.4 and the number five Karun Nair turned out to be lucky as he got the best seat in the house to watch one of the best IPL innings ever. To make things worse, Virat Kohli dropped his counterpart twice and Rahul made sure RCb pay for it big. After playing almost in the same way for the whole innings, he shifted gears dramatically in the last couple of overs.

Dale Steyn and Shivam Dube had to face the wrath as KXIP scored 49 runs. Rahul, in the process, surpassed the three-figure mark and ended up unbeaten on 132 off just 69 balls with 14 fours and seven sublime sixes. This helped KXIP post a mammoth total of 206 runs for the loss of just three wickets with only Chahal doing well for RCB.

During the chase, RCB came down to 5/3 in the first three overs itself as they lost the wickets of Devdutt Padikkal, Kohli, and Joshua Phillippe. However, they never managed to stay in the chase despite the AB de Villiers and Aaron Finch who was dismissed by M Ashwin and Ravi Bishnoi respectively.

Eventually, RCB lost the match by a huge margin of 97 runs as they were bundled out for 109 in 17 overs. For KXIP, Bishnoi and Aswin took three wickets each while, Sheldon Cottrell got a couple, and Mohammed Shami and Glenn Maxwell took a wicket each.

Here is how netizens reacted to the bizarre loss of RCB:

🤔 has this happened before? Interesting fall of wickets. pic.twitter.com/nh6RhYmkNL

Will it be a tournament of the openers and leg spinners ?? Nonetheless some top entertainment n swashbuckling innings by @klrahul11 and some fine bowling by young #bishnoi !! Congratulations @lionsdenkxip for the win and tough luck @RCBTweets tonight . #RCBvKXIP #IPL2020

At times you wonder how franchise cricket works! 😀

Elegant,classy,tremendous,fabulous,batting @klrahul11 words are less for this guy what a cricketer batting mastero really enjoyed his innings.
Became the fastest Indian to reach 2000 runs in #IPL pic.twitter.com/yF7HChnjI1

An emphatic victory for #KXIP and a statement made against an in-form #RCB! @lionsdenkxip can be a potential contender for the #IPL2020.#InsideOut #KXIPvsRCB 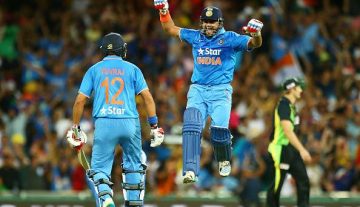