As per the reports if PTI, former Indian all-rounder, Irfan Pathan announced his retirement from all forms of cricket. Pathan, who was part of the team that won the 2007 World T20, appeared for India in 29 Tests, 120 ODIs and 24 T20Is. He last played for India in a T20I against South Africa on October 2, 2012, in Colombo in the 2012 World T20. The southpaw pacer is one of three Indian bowlers to claim a hat-trick in Test cricket.

Pathan debuted for India in the famous Test match against Australia in Adelaide that India won thanks to Rahul Dravid’s heroics. He made his ODI debut a month later against the same opposition in Melbourne.

While he never had express pace, he always had the natural ability to swing the ball into the right-handers got him instant success, also drawing comparisons with the great Kapil Dev. It seemed India had found the much-needed all-rounder after the retirement of Kapil.

Announcing his retirement, Pathan said, “I am announcing retirement from all forms of cricket. I have been fortunate to share the dressing room with greats of the game like Ganguly, Dravid, and Laxman. I am calling time on my career. I would like to thank my family for providing much-needed support. I would like to thank my fans. They have always hoped for my comeback. Their support has kept me going.”

In 2006, when India toured Pakistan, Irfan had probably his greatest moment on the cricket pitch. In the first over of the match in Karachi, he dismissed Salman Butt, Younis Khan, and Mohammad Yusuf off the last three deliveries to become the second Indian bowler to get a Test hat-trick after Harbhajan Singh.

Pathan also played a crucial role in India’s successful campaign in the first-ever World T20 in 2007, with a player-of-the-match performance in the final against Pakistan, when he picked up three wickets for 16 runs from his four overs.

Pathan, who started his domestic career for Baroda in the 2000/01 season, last played a competitive game in February 2019 during the Syed Mushtaq Ali trophy for Jammu and Kashmir.

Wish you great 2nd inn my brother @IrfanPathan what a champion bowler and a fighter on the field.. god bless you brother.. lots of love #irfanpathan #irfanretired pic.twitter.com/h3vQ8Ttd4w

So many match winning spells, numerous match winning innings, one of the best all arounders I have played with. You are a true champion @IrfanPathan my friend. Good luck for your second innings. Cheers #irfanpathan pic.twitter.com/J5GyGhhQ6g

Congratulations on an excellent career @IrfanPathan . Man of the Match in the T20 World Cup finals and some outstanding performances over the years. Wishing you some amazing time at commentary, photography and a lot more. Stay Blessed ! pic.twitter.com/aFv1lHiYxR

Was such a joy to see #IrfanPathan evolve from a aspiring 17yr old cricketer when I first saw him into a mature International Cricketer. You can be very proud of what u have achieved not only as a cricketer but also in mentoring young cricketers from J&K. A very happy 2nd innings pic.twitter.com/T63yF3G7z7

Well played @IrfanPathan 👏👏 all the best for your second innings

This @IrfanPathan is History. Man of the Match in Finals of WT20 2007, Irfan Pathan. Thank you for all the amazing memories. Looking forward to see you around the sport. #IrfanPathan #ThankyouIrfan @StarSportsIndia pic.twitter.com/ktI22wIDjL 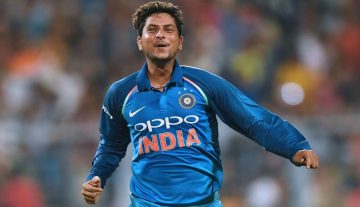 Article
By CricShots - Oct 18, 2017
Kuldeep Yadav Reveals The Secret Of His Success