USA batsman, Jaskaran Malhotra registered his name in the record books with his batting heroics on Thursday during the 2nd ODI against Papua New Guinea in Oman. The wicketkeeper-batsman slammed six sixes in the final over of the game only to become the second batsman in ODIs to do so after former South Africa batsman Herschelle Gibbs.

Jaskaran Malhotra blasted an unbeaten 173 off 124 balls with the help of 16 sixes (which is the second most in ODI innings), becoming the first cricketer from the USA to score an ODI century. Jaskaran’s knock, which was laced with 16 maximums and only four fours, stood out as he was the only batsman to score more than 22 runs. He overtook AB de Villiers’ 162 for the highest ODI score by a player batting at No. 5.

Jaskaran Malhotra, a Chandigarh-born right-hand batsman, smacked six sixes in against seam bowler Gaudi Toka in the final over of the innings after notching up his maiden ODI hundred. Here is the video of the same:

Jaskaran Malhotra joins an elite club among the likes of #YuvrajSingh and #Gibbs following this mammoth display with the bat! 🔥

6 sixes by Jaskaran Malhotra in an over against PNG in the second ODI.pic.twitter.com/xufvRXSK07

Jaskaran Malhotraalso smashed the second most number of sies in an ODI knock with Eoin Morgan holding the record of 17 maximums and at the second place there are some elite names like Rohit Sharma, Chris Gayle, and AB de Villiers. The USA managed to reach a total of 271-9 in 50 overs after Jaskaran’s carnage. In reply, PNG was bundled out for 137, handing 134 runs to the USA. With this win, America clinched the 2-match ODI series 2-0. They had won the first game by 7 wickets on Monday.

Jaskaran Malhotra has joined an exclusive club of international cricketers to hit 6️⃣ x 6️⃣s in an over with a stunning assault from the final 6 balls of the innings as he becomes the first American to make an ODI 💯 with 173 not out!

Former South Africa batsman Gibbs remains the first player to smash six sixes in an over in ODIs as he achieved the feat against the Netherlands during the 50-over World Cup in 2007. Six months later in 2007, former India all-rounder Yuvraj Singh equaled the record of smashing six sixes in an over, against England’s Stuart Broad during the inaugural T20 World Cup. 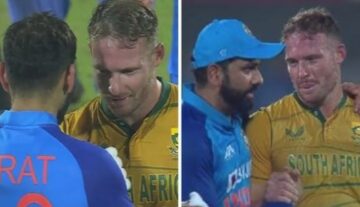