The Windies all-rounder, Jason Holder pulled off a record-breaking performance when it mattered the most to lead West Indies to a 17-run win in the final T20I against England as the hosts won the T20I series 3-2. The former captain had scalped four wickets in four balls in the last over and with that, he became the first West Indian male cricketer to take a hat-trick in T20Is. Women’s star Anisa Mohammed was the first Windies player to take a hat-trick in T20Is, achieving the feat against South Africa in 2018.

All-rounder Stafanie Taylor had also taken a T20I hat-trick in her resume, thanks to her brilliant performance against Pakistan Women in 2021. Jason Holder is the first Windies player to achieve the feat, delivering the goods to help his team beat the visiting English team. In the final over of the match, with England needing 20 runs to win, Holder got the wickets of Chris Jordan, Sam Billings, Adil Rashid, and Saqib Mahmood off consecutive deliveries to register his name in the record books.

WATCH – Earthquake experienced at Ireland-Zimbabwe game at U19 World Cup

With the series ties 2-2, it was all to play for at the Kensington Oval in Bridgetown, Barbados. West Indies batted first after winning the toss. Brandon King and Kyle Mayers gave their team a brilliant start. However, the hosts lost a couple of wickets after the powerplay that dented their scoring rate.

Nicholas Pooran played an uncharacteristically slow knock, as he scored 21 off 24 balls. However, Kieron Pollard and Rovman Powell provided much-needed momentum in the first innings. The duo made a partnership of 74 runs in just 33 balls, both remaining unbeaten to power the hosts to 179 for four in their 20 overs.

In reply, England lost both openers — Jason Roy and Tom Banton — in the first six overs itself, however, some fine hitting from James Vince helped them keep abreast with the required rate. West Indies, though, kept on taking crucial wickets to stop the English from running away with the game. And after Vince fell for a 35-ball 55, the hosts took control of the proceedings.

Sam Billings played a crucial knock of 41 off just 28 balls to keep England in the hunt during the chase but found no support from the others. Holder put the final nail in England’s coffin with his double hat-trick as West Indies won the series 3-2. 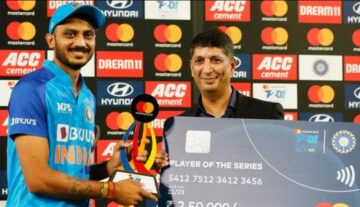