New Zealand and England locked horns with each other in the Super 12 clash of T20 World Cup 2022 at Gabba in Brisbane. However, in the first innings, after being asked to bowl first, Kane Williamson, who is often considered to be an ‘honest’ player, suffered some criticism as his honesty came under the radar when he ‘claimed’ a grounded catch.

After scoring 24 off the first four overs against New Zealand on Tuesday, England was looking to shift gears to take 15 runs off the fifth, bowled by Tim Southee. It forced New Zealand skipper Kane Williamson to bring Mitchell Santner into the sixth over.

The ploy almost worked as Santner’s third ball, which was short and the ball was spinning away from Jos Buttler, outfoxed the English skipper. Buttler did not read the pace of the ball, resulting in miscuing it towards extra cover. The ball was going away from Williamson, who placed himself at short extra cover. The Kiwi ran backward and dived as much as he could to get to the ball, and it seemed he was successful in doing that in real-time.

After watching Kane Williamson pull off an outstanding effort, Buttler initially thought his innings would come to an end and began to walk off the field. However, the on-field umpires told him to stop as they wanted to double-check whether Williamson had taken the catch cleanly or not.

Then the replay on the big screen clearly showed that ball touching the ground when Kane Williamson tried to grab that. As a result, the third-umpire changed the decision to not out. Though Williamson was not sure about the catch, and he told the umpires he had no idea whether it was clean or not.

The netizens came up to question the honesty of Kane Williamson, as the Kiwi skipper is known for being a ‘good boy’ of the sport.

I wager someone without Kane Williamson's nice guy reputation would get slaughtered for claiming that.

I do believe he genuinely thought he caught it cleanly, but a player with a "worse" reputation would be judged differently.

Kane Williamson apologized to Jos Buttler for being wrong in claiming the catch. pic.twitter.com/f01j6PwhBG

When someone asks me about Kane Williamson claiming a catch that was dropped. #ENGvNZ pic.twitter.com/CB5N4NWLnH

Everyone would be calling Kane Williamson a cheat if he weren't a Kiwi with that nice-guy image. #T20WC2022 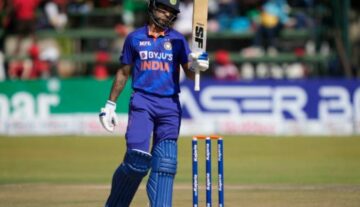