Das was coming out all guns blazing and snatching the advantage of making 184/6 from India through a breathtaking 60 not out off 27 balls, with the help of seven fours and three sixes at a strike rate of 226.9. KL Rahul could only see one wicket but still, he managed to hit the wicket and helped India bounce back into the game.

Here is the video of the direct hit from KL Rahul:

Earlier in the game, KL Rahul managed to get his form back as he scored a morale-boosting 50. He looked a bit rusty in the first 10 balls of his innings, especially the ones bowled outside the off-stump line. He was under pressure as he was coming into this contest on the back of three successive failures having scored just 4, 9, and, 9 runs so far.

However, once skipper Rohit Sharma was dismissed with just two runs against his name off eight deliveries, Rahul decided to take the charge and played a fearless brand of cricket. KL Rahul looked so good that even Virat Kohli played a second fiddle during their 67-run partnership for the second wicket.

KL Rahul looked well set for a big score, but it was not to be as he was dismissed immediately after reaching his half-century by Shakib Al Hasan. He walked back to the dugout scoring 50 runs off 32 balls at a strike rate of 156.25 and his knock included three fours and four sixes.

Virat Kohli attacked the Bangladesh bowler and remained unbeaten on 64 off 44 balls with eight fours and a six to take India to a strong total of 184/6. With this, Kohli’s love affair with the Adelaide Oval continued as earlier in the innings, the former India captain had become the all-time leading run-scorer of the T20 World Cup.

Here is how the fans reacted to the direct hit from KL Rahul:

Man of the tournament already to KL for this throw to get Liton Das 🔥#INDvsBAN #KLRahul pic.twitter.com/zvOMfaIWjb

KL Rahul is having a great day with Bat and on Field!#T20worldcup#T20WorldCup2022 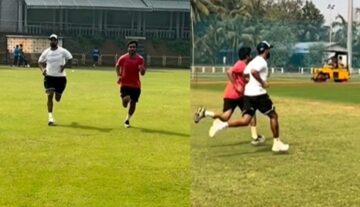