Indian skipper Virat Kohli got a sudden surprise from his wife Anushka Sharma as she landed in South Africa to meet him from taking some time off from her busy schedule. They haven’t met each other since January when Anushka returned to India after spending the New Year eve with Kohli.

Kohli posted an image of himself and Anushka on his Instagram account where this power couple was hugging each other. He captioned “My one and only Love” underneath the post and expressed his feelings for his wife.

Later, Anushka Sharma made this image as her profile picture on Instagram. 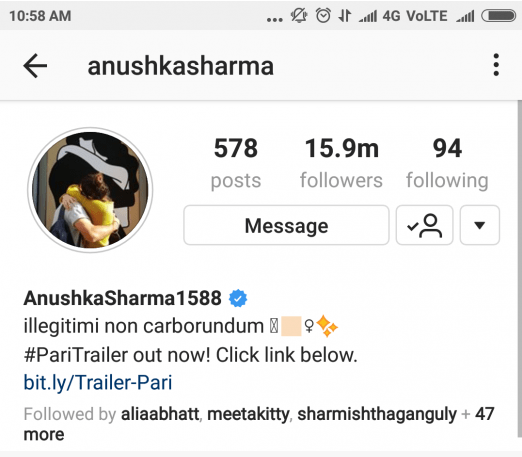 This adorable pic got viral as soon as Kohli posted this and it awakens the love sensation among their fans. In the month of love, they gave everyone relationship goals expressing their feelings openly.

The couple got married on 11 December in Italy’s picturesque location Tuscany in a private ceremony. Both Anushka and Virat made it public only after exchanging the vows to each other.

Afterwards, the couple got off for the honeymoon before landing back in India for the reception ceremonies. The first leg of the celebration was held in Delhi where all the relatives and family friends were invited. The second reception in Mumbai was for the people connected to Cricket and Bollywood world.