Videos
Malaysian Cricketer Lost The Control Of The Ball After A Brilliant Effort
By CricShots - Oct 11, 2022 4:55 pm
Views 25

However, after recovering from the dive, the Malaysian cricketer tried to flick the ball away from the fence and made contact with the ball while being beyond the boundary herself. The fielder could have easily allowed the backup fielder who wasn’t far away and had easily kept it away from the fence.

ALSO READ: Aaron Finch Receives Fine For His Obscenity ON The Field

This incident happened on the fourth delivery of the 13th over of Thailand’s innings when Thailand batter Koncharoenkai managed to get clean bowled by Malaysian bowler Nur Arianna Natsya. Koncharoenkai played an aggressive shot toward the mid-wicket region in order to get a boundary that was first saved by the fielder and then eventually ruined by her in the second attempt.

Thailand team posted a competitive total of 115 runs for the loss of 5 wickets with the help of Koncharoenkai’s excellent knock of 41. She got some support from skipper Chaiwai and Sutthiruang.

ALSO READ: Yuzvendra Chahal Talks About His Focus Ahead Of The T20 World Cup

The total of 115 runs proved to be a tough task for the Malaysian side as they could just make 65 runs from their 20 overs while losing 8 wickets. No Malaysian batter was able to cross the mark of 20 runs. Thipatcha Putthawong was the stand-out bowler for Thailand as she grabbed two wickets and gave just 7 runs from her 4 overs while bowling a maiden over too. 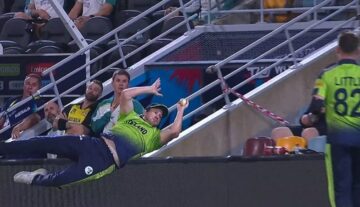