Legendary Sri Lankan fast bowler, Lasith Malinga has been one of the finest bowlers the game of cricket has ever seen. He was not just known for his fiery bowling but also for his slinging unique throw-down action through which he terrorize the opposition batters for years. Sri Lanka might have another ‘Lasith Malinga’, as right-arm fast bowler Matheesha Pathirana was seen giving a nostalgic trip to the fans of the former Sri Lankan cricketer.

Matheesha Pathirana came to the limelight during the game against Kuwait U-19 in the first match of the ongoing U-19 Asia Cup at the Sharjah Cricket Stadium on Thursday. The 19-year old Pathirana produced some lanky bouncers and yorkers as the Lankan Lions registered a huge victory by 274 runs. He finished with figures 7-2 in 3 overs.

The Sri Lankan team started off with a thumping win as batting first, they scored 323 runs for 5 wickets in the match. In reply, Kuwait’s entire team was reduced to 49 runs. Sri Lanka’s Pawan Pathiraja was adjudged the player of the match. He played an innings of 86 runs in the match.

Here is the video of Matheesha Pathirananailing the slingy bowling action:

Sri Lanka gets a new Slinga-Malinga
Meet Matheesha Pathirana, who produced some lanky bouncers and yorkers vs Kuwait U-19. Lankan Lions romped to a 274 run-victory. He finished with figures 7-2 in 3 overs.#U19AsiaCup #SharjahCricketStadium

This is not the first time, the Sri Lankan pacer is grabbing all the attention of the media. Last year during the 2020 U-19 Cricket World Cup, while playing against India, the pacer was believed to deliver the fastest ever ball in cricket history at 175 kmph.

His wayward delivery to this year’s Rajasthan Royals man, Yashasvi Jaiswal clocked 108 mph on the speed gun, but later it was revealed that the reading turned out to be a technical error. His approach to the game looks even more fearsome than Malinga and who knows Matheesha Pathirana can become a world-class fast bowler in the future. 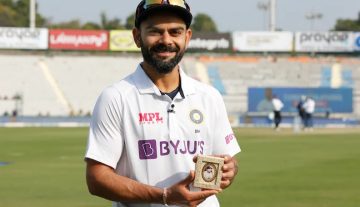 Social Shots
By CricShots - Jun 21, 2022
Virat Kohli Gets Nostalgic On The 11th Anniversary Of His Test Debut