On Sunday evening, the Mumbai Cricket Association (MCA) felicitated members of the Indian Women’s Cricket team, who were the runners up in the recently concluded World Cup in England.

MCA president and BJP MLA Ashish Shelar honored team members – Captain Mithali Raj, Poonam Raut, Smriti Mandhana, Mona Meshram, Harmanpreet Kaur at a gala ceremony. All the cricketers were given a memento and membership of the MCA’s facility at suburban Bandra Kurla Complex, while Mona, Poonam, and Smriti have rewarded with a prize money of INR 5 lakh each as earlier announced by MCA.

In a swashbuckling World Cup final, Team India ended up on the losing side at the iconic Lords.

During the ceremony, Mithali recalled her difficult journey. As per the report of TOI, she said, “The cricketers who are sitting back can watch women cricketers as role models. For us, we have only seen men’s cricketers. We have seen Sachin (Tendulkar), Kapil Dev play and those are the videos we watched. But this is a revolution and they (the budding women cricketers) can see Harmanpreet, Poonam, Smriti play.”

She further added, “While we were going only two media people had come, but when we returned the entire country knew it and that was an achievement.”

Poonam Raut, who played a brilliant knock of 86 runs in the final, said that the reception which they received on arrival was like a dream. She said, “We narrowly missed winning the cup, but the love people have showered on us has inspired us. Our goal is to win the next World Cup and we will surely win it.”

Mandhana recalled how they prepared for the tournament by reaching 15 days before its commencement in order to acquaint themselves with the conditions. She also paid a vote of thanks to the physios and trainers at the NCA who helped her recover from the injury. 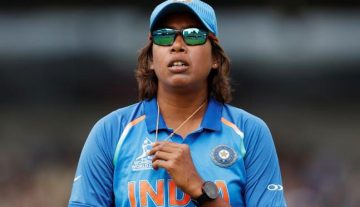