Cricket Australia (CA) is likely to take their final call in this week on the suspensions of Steven Smith, David Warner and Cameron Bancroft. However, the former Australian fast bowler Mitchell Johnson believes that the bans should stay.

In this March, during the Cape Town Test between South Africa and Australia, the Australian cricketer Cameron Bancroft was caught in on-field cameras to trying to alter the ball condition by using yellow sandpaper. Later, it was revealed that the vice-captain David Warner was the mastermind of this action while the skipper Steven Smith was also aware of this incident.

After the investigation, CA suspended Smith and Warner for one-year each and Bancroft for nine months. Moreover, Warner will never be a captain while Smith and Bancroft will have to wait one more year after completion of their suspension to lead a side.

Since their suspensions, the team’s performances have hugely declined in the international cricket. While Bancroft’s suspension period is going to be ended very soon, Smith and Warner will have to wait three more months. Observing the present condition and on the base of Australian Cricketers’ Association’s (ACA) request, CA is looking to reconsider the bans.

However, on his official Twitter account, the former Australian left-arm pacer Mitchell Johnson wrote, “I thought 3 players were banned. So does that mean Cameron Bancroft’s ban will be reduced to the same amount as Smith & Warner if it goes ahead? They all accepted their bans & didn’t contest it so I think the bans should stay.”

I thought 3 players were banned 🤔So does that mean Cameron Bancroft’s ban will be reduced to the same amount as Smith & Warner if it goes ahead? They all accepted their bans & didn’t contest it so I think the bans should stay https://t.co/9IoCfjl3P5

Before that, the former Australian skipper Ian Chappell also spoke about this as he wants the bans shouldn’t be reduced, despite the team’s declined performances.

Ian Chappell told ESPNcricinfo, “Do I think that some of the bans should have been reduced? No, I don’t think they should, because of the things that came out of the Longstaff review was that they felt the attitude was to win and don’t count the cost. If they would have brought Smith, Warner, and Bancroft back into the team against India, then they would say ‘here we go again’, don’t count the cost let’s just make sure we win.” 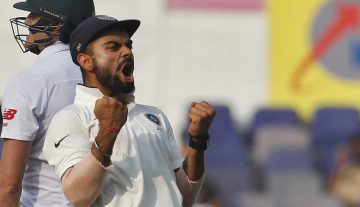 Article
By CricShots - Jun 8, 2017
Most angry cricketers in the history of the game