After the successful World Cup journey (2017) and South Africa tour, Indian women’s cricket team lost the home ODI series against Australia and also providing not a good results in the ongoing T20I home tri-series against Australia and England. However, Indian women’s Test and ODI skipper Mithali Raj is looking forward to the clean-sweep to Sri Lanka.

While Indian women’s cricket team had a great journey in the 2017 ICC Women’s Cricket World Cup (runners-up), they continued their great performances on their last foreign tour in South Africa (won ODI series by 1-2 and won T20I series by 1-3), where they won ODI and T20I series.

But, in the recent three-match home ODI series against the Australian women, Indian women’s cricket team suffered a whitewash (lost by the 0-3 margin). Later, in the ongoing T20I tri-series between the hosts India, England and Australia, India is still winless in their three matches.

The recent home ODI series against Australia was the part of 2017–20 ICC ODI Women’s Championship. After that heavy series defeat, India is now standing at the fifth position of the points table with 4 points.

While the top four team in the final points table will automatically qualify for the 2021 ICC Women’s Cricket World Cup, India needs to improve their performances in their upcoming ODI encounters.

The 35-years old right-handed batsman said, “We will definitely look for a clean sweep to get six points (in the next series) against Sri Lanka. It becomes very important that whatever ICC Championship matches that we play (from here on) against other teams to aim and play for those points since we have lost out on six points (against Australia) and we lost two points in South Africa.

“From the tour to South Africa we have got four points but we haven’t managed to get even two points from the series against Australia (but) we still have other teams to go (play against). Now, whenever we play against other teams it will be important for us not to lose out on any games.”

After the end of the ongoing tri-series, India will also play the three-match home ODI series against England but that will be not any part of the 2017–20 ICC ODI Women’s Championship. 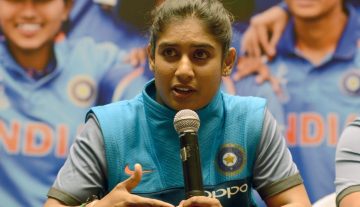