The Indian fast bowler, Mohammed Siraj bowled some crucial overs and took wickets at the right intervals which helped India register a historic win at Lord’s against England. The pacer snapped 8 wickets in the match – 4 in each innings – including hitting the final nail in the coffin as he dismissed James Anderson, who was the last man in England’s defense.

With a couple of wickets in the 52nd over of England’s innings, Mohammed Siraj completed the historic victory. On the second ball of the over, the Hyderabad fast bowler also got the wicket of Jos Buttler, who had stood like a rock for 95 deliveries until then.

And finally, on the fifth ball, Mohammed Siraj, after shocking Anderson with a short one on the previous delivery, changed the angle to round the wicket and executed the length ball at stumps, which straightened on pitching and beat the batsman on the outside edge, hitting the top of the off-stump. While in his celebration, Mohammed Siraj was seen running towards the stumps and uprooted one, and scenes of jubilation waved across the Lord’s. Meanwhile, Rohit Sharma took a stunning one-handed catch after the ball crashed at stumps and most of us didn’t notice it.

Here is the video of the final wicket:

The Indian skipper, Virat Kohli said the team had the belief that they could bowl England out inside 60 overs – and he was proved correct by the four pacers alongside Ravindra Jadeja, bowling attack as India won with 8 overs to spare.

Earlier it was an 89-run partnership between Jasprit Burman and Mohammed Shami which helped India to take a lead of more than 250 runs. The skipper also lauded Siraj’s character for his relentless, energetic bowling while playing for the first time the storied Lord’s.

After the game, Virat Kohli said, “We had the belief we can get them out in 60 overs. To get a result in 60 overs is quite special. And especially with someone like Siraj playing for the first time at Lord’s and he bowled superbly. We decided 60 is our mark. Crucial breakthroughs with the new ball was the right start for us.” 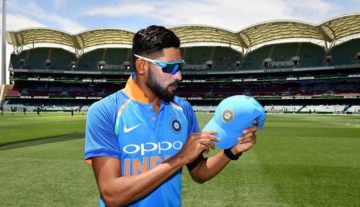 News
By Aditya Pratap - Sep 17, 2021
Mohammed Siraj Dreams Of Playing T20 WC, Knows Selection Is Not In His Hands