India is locking horns, with South Africa in the second ODI of the three-match series at the JSCA Stadium in Ranchi. However, in the slog overs of the first innings, Mohammed Siraj made an attempt to cleverly run-out explosive South African batter David Miller on the non-striker’s end ended in embarrassment for him as he ended up conceding four overthrow runs.

The incident took place in the 48th over of the South African innings as Mohammed Siraj looked to help India finish on a high and ensure the Proteas do not get away with the match. The Indian pacer bowled a good delivery to Keshav Maharaj who could get any runs.

While Indian fans and the cricketers were happy about the outcome of the delivery; Mohammed Siraj spotted David Miller outside his crease after wicket-keeper Sanju Samson returned the ball to him. The 28-year-old saw the opportunity to run out the in-form left-hander and threw the ball at the stumps. However, he ended up missing the stumps. With no cover in place for the throw, the ball rushed the boundary and earned the Proteas four overthrow runs.

Mohammed Siraj was not pleased with the umpire and was seen having a heated argument with the umpire. Indian vice-captain Shreyas Iyer supported the pacer but there was no official confirmation on the subject, it is widely believed that Siraj and Shreyas were arguing that since the ball had reached the keeper’s hand, it should be declared as a dead ball.

However, if that was the case there was no chance of David Miller being dismissed run-out and which makes Siraj’s intention behind the throw hard to understand. Despite the comedy of errors during this incident; Mohammed Siraj had a brilliant day with the ball as he finished with three wickets to his name and gave away just 38 runs in 10 overs. The visitors put up a respectable score of 278 on the board.

However, in the second innings, Quinton de Kock came up with a savage response when he mocked Siraj by demanding a dead ball on Bjorn Fortuin’s throw. Fortuin was bowling the third over of the innings and Shubman Gill drove the second ball of the over back to Fortuin. Gill was just ahead of his crease, and Fortuin decided to take an aim at the stumps. However, his throw was accurate, unlike Mohammed Siraj, yet, Gill and Shikhar Dhawan had time to complete a single run.

It was an error from the spinner, but Quinton de Kock came up with a funny response after the stumps were broken. The Proteas wicketkeeper appealed for a dead ball to the umpire with a smile, mocking Siraj as the Indian did in the first innings. On-field umpire Virender Sharma too laughed back at de Kock after watching him doing that as he was well aware of the fact that it was not a serious appeal at all.

Bjorn Fortuin's first over in T20Is is a maiden over! 🫰🏻So easy! #INDvSA

Indian teams are built to help other players maje records.

He did from dead ball situations(corners) it’s aimed at when he’s on the ball running at players and his decision making.

Unbelievable why throw for the stumps and then say dead ball. Something about India and controversial run outs 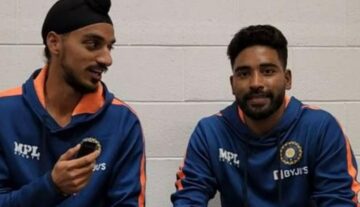 Videos
By CricShots - Nov 23, 2022
Mohammed Siraj And Arshdeep Singh Interview Each Other