The Chennai Super Kings (CSK) skipper, MS Dhoni has always been known for hitting monstrous sixes which are a common part of his illustrious career. He might not be in the best of forms in the ongoing season of the Indian Premier League (IPL) 2020, but time and again, the champion batsman displays just why he is one of the most brutal hitters of a cricket ball.

Dhoni showed that again during the ongoing fixture against SunRisers Hyderabad (SRH) at the Dubai international stadium when he smoked rookie fast bowler, T Natarajan for 102 meters six over long-on. The CSK skipper, who had come in to bat following the dismissal of Shane Watson in the 17th over, scored a 13-ball 21, which included two fours and a six, all of which came against T Natarajan,

Earlier, CSK made a rare experiment when they decided to send the all-rounder, Sam Curran to open the innings alongside Faf du Plessis. However, the latter got out on a golden duck. Curran repaid the faith as he took the attack to Khaleel Ahmed in the powerplay before eventually getting castled by Sandeep Sharma.

Shane Watson [42 off 38 balls] and Ambati Rayudu [41 off 34 balls] added as many as 81 runs for the third wicket, but they perished in an attempt to up the ante in the final 5 overs. CSK, however, ended on a high courtesy of Ravindra Jadeja’s whirlwind 10-ball 25 to eventually post a competitive total of 6-167 in 20 overs.

ALSO READ: Chris Gayle WIll Be Playing His First Game Of IPL 2020 Against RCB?

For Sunrisers, Sandeep Sharma, Natarajan, and Khaleel Ahmed picked a couple of wickets each, but Sandeep was the19  most economical one as he gave away just 19 runs in his spell of four overs.

Here is the video of the monstrous six: 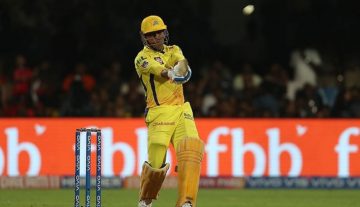