The Chennai Super Kings (CSK) gave some glimpses of their training camp and as per the expectations, skipper, MS Dhoni can be seen in full flow ahead of the Indian Premier League (IPL) 2020. The CSK captain, who announced his retirement from international cricket on August 15, was seen enjoying himself at the nets in Chennai before their departure to UAE.

After quite a few requests from fans, on Friday, CSK shared a small clip of their training camp which was held in Chennai between August 15 and August 20. Captioning the video, CSK wrote: “The super camp sorely missed the super fans, thanks to COVID. But we managed to end it with a loud whistle!”

ALSO READ: MS Dhoni And His Men Seems Happy While Leaving For UAE

All eyes were on MS Dhoni as the CSK captain can be seen swinging at will at the nets. He was drilling them down the ground as well hitting them into the stands at the MA Chidambaram Stadium. Towards the end of the video, his deputy, Suresh Raina can be seen cheering for Dhoni after the CSK skipper steps down the wicket and hits one into the stands.

The super camp sorely missed the super fans, thanks to COVID. But we managed to end it with a loud whistle! #WhistlePodu #Yellove 🦁💛 pic.twitter.com/z8NoMk7h6p

The short clip starts with Dhoni bowling some deliveries while the likes of Piyush Chawla, Karn Sharma, and Deepak Chahar are bowling. Raina can also be spotted, timing some of the deliveries quite precisely. Notably, he also followed Dhoni into international retirement as the two CSK stars announced their decisions in Instagram posts in a span of minutes on the occasion of India’s 74th Independence Day.

MS Dhoni will be in the limelight in the UAE as fans will be keen on catching a glimpse of the World Cup-winning former Indian skipper in competitive action after almost 14 months.

Meanwhile, a batch of Chennai Super Kings players left for the UAE from Chennai on Friday. Dhoni, Ravindra Jadeja, and Suresh Raina were all spotted sporting big smiles as they were preparing to board the team bus en route to the airport. 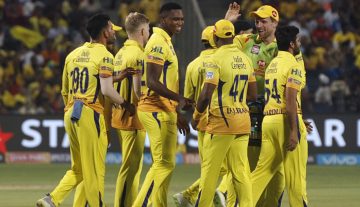