Another day; another match-winning knock, another stunning boundary to finish the game for his Team… For Mahendra Singh Dhoni, it might just have been another day at Office, but for legions of his fans, it was a day of reckoning; a day of rejoicing and a day of unprecedented happiness, even as Dhoni sprang back to form with a dazzling knock accentuated by powerful hitting.

The way Dhoni paced his knock was reminiscent of old times, when ‘Mahi’, as he is popularly known, would take a few balls to set his eye in, before launching a blitzkrieg and completely demolishing the opposition’s bowling attack. Today was no different, as vintage MSD was on display. His first 19 balls yielded just 20 runs. The next 15 yielded him a brilliant 41 runs, and the Rising Pune Supergiant, an extremely important win in the context of their campaign.

Yet, what was most mesmerising was the way MSD decimated probably the best bowler of the tournament so far – Bhuvaneshwar Kumar. Bhuvi came in to bowl his final over with RPS needing 30 off 2 overs. Bhuvaneshwar has this astonishing ability of bowling shrilling yorkers in the final stages. And he did that. He bowled yorkers immaculately but bowled them to someone who has an unbelievable strike-rate of 165 off yorkers. MSD scored two boundaries and a phenomenal bottom-handed six off the next three. The equation came down to 11 off 1 over. Again, when Pune needed 4 off 2 and when the dugout could be seen unsettled, the man, as cool as a cucumber, was unruffled – he first hit it towards cow-corner and ran two – and then bludgeoned one through covers for a terrific boundary – thus finishing the game for the Goenka-owned Rising Pune Supergiant, even as the stadium erupted, “Dhoni Dhoni” chants ratcheting up.

Twitterati got to work yet again, heaping praises on the former India Captain and his splendid knock. A few even trolled Harsh Goenka, who had sparked off a controversy earlier in the month, by tweeting controversial stuff about Dhoni.

Bringing you a few of the Tweets: 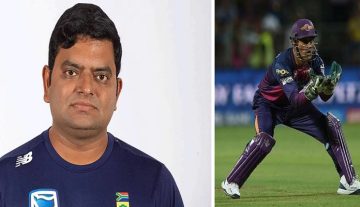