India Test opener Murali Vijay has shared his disappointment on being dropped from Tamil Nadu’s squad for the ongoing Vijay Hazare Trophy. Earlier, this month Vijay had opted out for Group C encounter against Mumbai citing “shoulder pain”. Consequently, the Tamil Nadu Cricket Association (TNCA) took the decision of dropping Vijay of the remainder of the Vijay Hazare Trophy.

During a recent interaction with TOI, Vijay said, “I just feel sad for whatever that has happened. Things could have been handled better. I’m set to talk with the TNCA officials soon and I feel things will be fine. I felt let down that my commitment was questioned and I was hurt. I love playing for Tamil Nadu and take a lot of pride in representing the state. My dream is to win the Ranji Trophy for TN and I’m confident it will happen.”

When asked about his performance in South Africa, Vijay said, “In all the Tests, I had got in, played a few balls and had a look at the wicket. It all boils down to shot selection, which happens at that level. There were also good bowlers, bowling in the right channel and the pitches were a little difficult. I hope to apply the experience I had gained in the future tours.”

Earlier, a TNCA official had expressed to ESPNCricinfo that they were unhappy with Vijay’s attitude after he failed to report to the ground. He said, “How can we find a replacement at the last minute? Vijay didn’t report to the ground and neither did he inform the selectors about his injury. It was very disappointing, o say the least.”

One of the top officials of TNCA also shared that this kind of incident isn’t happening for the first time in the Tamil Nadu team management, he said, “This isn’t the first time something like this has happened. The selectors weren’t even inclined towards picking him in the four-day squads [for the Ranji Trophy] in the first place because of issues with his attitude and general aloofness.” 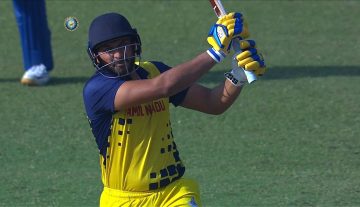 News
By SMCS - Feb 15, 2022
Shahrukh Khan says Anil Kumble asked him to be ready to bowl for PBKS