Australia’s offspinner, Nathan Lyon has been charged by the International Cricket Council (ICC) for dropping the ball on South Africa’s star batsman AB de Villiers after the veteran batsman was run out in South Africa’s second innings of the Durban Test of the four-match series.

In the 12th over of the 2nd innings bowled by Lyon, David Warner and the offspinner had combinedly affected De Villiers’ run out as the batsman couldn’t get back to the non-striker’s end. After dislodging the bails, Lyon dropped the ball which brushed the chest of De Villiers who was down on the ground after attempting a dive to get to the crease.

Jeff Crowe, the match referee, evaluated the incident and Lyon is set to be charged with a Level 1 breach of the ICC Code of Conduct for Players and Player Support Personnel, which carries a minimum penalty of an official reprimand, a maximum penalty of 50 percent of a player’s match fee, and one or two demerit points.

According to a Cricket Australia (CA) spokesperson, Lyon apologized to De Villiers and conveyed to him that there was no hate intended.

Former South Africa skipper Graeme Smith labeled Lyon’s actions unnecessary. Talking to cricket.com.au, he said, “The Aussies were pretty fired up at that time pushing for a victory. But he (Lyon) is an experienced cricketer. I think he’ll probably say it was unnecessary himself.”

The first Test, which Australia won by 118 runs, has already been hit by the David Warner-Quinton de Kock controversy with a CCTV footage revealing the Australian opener engaging in a verbal exchange with the South African wicketkeeper-batsman as the players made their way to their dressing rooms.

The Australian deputy skipper led to elated celebrations with his teammates as Nathan Lyon, who had knocked off the bails, dropped the ball towards the dismissed De Villiers as Warner ran over to join the team. 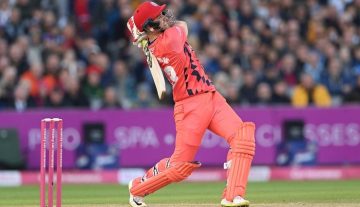