The Indian Test specialist, Cheteshwar Pujara dropped a straightforward chance to get rid of the South African top-order batter, Keegan Petersen while fielding at first slip on Day 4 of the ongoing third and final Test at New Lands in Cape Town. Petersen, who scored a half-century in the first innings of the Cape Town Test, registered another fifty in the final innings of the series.

The incident took place on the 4th ball of the 40th over as the premier Indian fast bowler, Jasprit Bumrah had managed to produce a nick out of Keegan Petersen bat. The ball went straight to Pujara at chest height, but he failed to grab it in time and ended up dropping a straightforward chance. However, Bumrah frowned after the drop and walked back to his bowling mark.

Earlier in the game, Jasprit Bumrah was in a super spell on day 4 morning but both Keegan Petersen and Rassie Van der Dussen kept playing and missing. There was no reaction from the Indian players as well as the fielders passed on the ball back to Bumrah.

Apart from the reserved number three spot in the test batting lineup, Cheteshwar Pujara also has a reserved spot in the Indian slip cordon – 1st slip. It is fair to say he is under pressure with so much being said about him. In the 3rd test at Cape Town, he scored 52 runs in total, including a 43.

Meanwhile, netizens weren’t happy with Cheteshwar Pujara who missed a great opportunity that could have marked India’s comeback into the match. Defending a low total, chances like these are very crucial.

Here is the video of the catch drop by Chetshwar Pujara:

In the recent days, Cheteshwar Pujara dropped many catches in slips. The major reason behind is he is too stick at his place and not judging the height of the ball. He should learn lessons from this because catches win matches.#CheteshwarPujara #SAvIND #WTC23 #CricketTwitter pic.twitter.com/RWC9CwGMYS

Here is how the Indian fans reacted to the dropped catch:

Because of pujara ,Rahane we don't take this home today😭😭😭

Unless India manages to get a quick fire wickets before lunch, Kohli will lose hi 1st test while defending 211.

Rahane and pujara are the secret agents of South Africa…!#SAvIND #INDvsSa

Visual representation of Che Pujara letting his Test career slip away from his hands. pic.twitter.com/43xsszWgeb 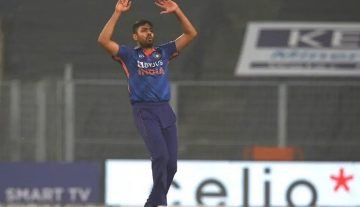 Twitter Reaction
By CricShots - Aug 2, 2022
Indians Fans Were Disappointed To Avesh Khan Bowling The Last Over