Kolkata Knight Riders (KKR) co-owner Juhi Chawla was seen praying in the stands when her side was involved in a thrilling clash against Chennai Super Kings in Dubai on Thursday. However, the Bollywood actress’ prayers were of no use as KKR eventually lost the match by six wickets to deal a mighty blow to the Kolkata-based outfit’s playoff chances.

KKR is still in the hunt to reach the playoffs, but their destiny isn’t in their hands now. Even if they win their last league game, they will have to depend on other results for a place in the playoffs. With six wins from 13 games, KKR is standing at the 5th position at the points table. CSK, on the other hand, is already out of the playoff race.

The match ended on a thrilling note as the Superkings needed 10 runs in the final over while chasing 173, Ravindra Jadeja and Sam Curran had managed just three runs off the first four balls bowled by young Kamlesh Nagarkoti. However, With seven needed off the last two balls and Nagarkoti bowling well, it looked like KKR might pull off another close win this season.

However, Jadeja had some other plans as he smashed the last two balls for huge sixes to seal the thrilling game for his side. Jadeja remained unbeaten on 31 off just 11 balls with the help of two fours and three sixes. Before him, Ruturaj Gaikwad had played a fine 72-run knock to give CSK a good start.

As if the defeat was not enough, Juhi Chawla was immensely trolled on social media after being spotted praying in the stands. Just before Jadeja hit the winning runs, the KKR co-owner was seen praying from the stands. And it was enough for some fans to have some fun at Chawla’s expense on social media.

Saw a devastated Juhi Chawla when Jadeja hoiked that ball for a six, it took me time to realise that it was a LIVE cricket match and not a new CRED ad. 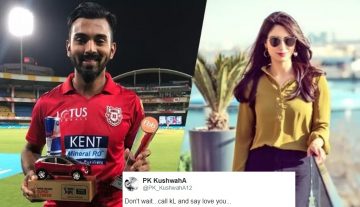 Social Shots
By CricShots - May 11, 2018
Twitterati did Match-making for KL Rahul with Zainab Abbas