There is no denying the fact that the world cricket has witnessed a drastic change since the Indian all-rounder, Ravindra Jadeja claimed a mind-boggling catch at Hagley Oval during the second Test against New Zealand on March 1. Due to the COVID-19 pandemic, almost every country went through a complete lockdown, and sports, including cricket, were put on hold. But the all-rounder entertained his fans with his usual gymnastics which has made him a very important member for Virat Kohli.

The catch was so astonishing that commentator Ian Smith was heard on the broadcast saying, “Quite possibly one of the greatest outfields catches in the history of the game!” However, on Thursday, New Zealand cricket team’s official Twitter handle posted a video of the catch, with a #ThrowbackThursday hashtag.

The Saurashtra all-rounder was standing at deep square leg when Mohammed Shami delivered a short ball to tail-ender Neil Wagner. Jadeja jumped and stuck out his left hand, catching the ball in a sensational manner to end the innings of the hosts.

#ThrowbackThursday | "Quite possibly one of the greatest outfield catches in the history of the game!"

Do you agree with Ian Smith on this effort from @imjadeja?

Other than Jadeja’s personal highlight, India failed to do a better job against the Kiwis, who won the second Test by seven wickets. New Zealand also won the first Test match by 10 wickets, winning the Test series 2-0.

The two-match Test series was a part of India’s tour of New Zealand, which also consisted of five T20Is and three ODIs. The visitors were too hot to handle for the hosts in the T20I, winning every match. While in the ODIs, the home side won all the matches.

The Indian cricketers will be back in action with the Indian Premier League (IPL) which is scheduled to be commencing on September 19. The matches will be held in the United Arab Emirates (UAE) due to the rising COVID-19 cases in India. Mumbai Indians will play the first match of the franchise-based T20 league against Chennai Super Kings (CSK). The final will be held on November 10. 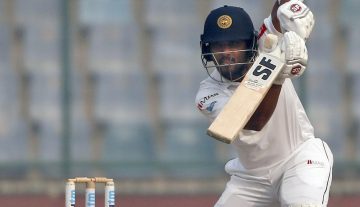 Article
By CricShots - Dec 4, 2017
Stumps: Ind vs SL: 3rd Test (Day 3): Mathews and Chandimal Saved The Pride Of The Islanders