It was another tied game that witnessed a result in a Super Over and yet again New Zealand failed to get over the line in the 4th T20I of the five-match series against India at the Westpac Stadium in Wellington. However, this time, it was KL Rahul and Virat Kohli, who finished things off in a style after Shardul Thakur’s impressive show with the ball in the final over.

Chasing a target of 166, New Zealand suffered an early blow as Martin Guptill was dismissed early by Jasprit Bumrah,  but Colin Munro and Tim Seifert took the onus on their shoulders to balance the chase for New Zealand. Just when things looked pretty ordinary for India, Virat Kohli churn-out a brilliant run-out to dismiss Munro.

The swashbuckling southpaw went back with 64 runs to his name. He was quickly followed by Tom Bruce but Tim Seifert and Ross Taylor again tried to do the balancing act as the duo added 62 runs for the 4th wicket but the latter got out off the first ball of the final over bowled by Shardul Thakur with seven still required to win.

And once again it was a repeat of Hamilton T20I. Daryl Mitchell and Seifert were dismissed in the matter of next three balls and they needed 2 runs on the last ball. Mitchell Santner only managed to pick a single and the game yet again went into the super over with New Zealand finishing on 165/7 after 20 overs.

In the Super Over, Jasprit Bumrah took the ball and went on to concede 13 runs which gave the Kiwis some hope. Tim Southee once again took it upon him to defend the total. But the fast bowler dished out a length ball to KL Rahul first up and the batsman smacked it for a huge six followed by a boundary before getting out on the third ball with the equation comes down to four runs from three balls. However, Virat Kohli came on strike and played it smartly to take his team over the line as he won it for India in the super over to take a 4-0 lead in the series.

Earlier in the day, New Zealand has won the toss and asked the men in blue to bat first. Justifying the decision of the skipper, New Zealand picked a couple of wickets in the powerplay including the dismissal of Kohli and Sanju Samson. Then came the magical effort from Ish Sodhi, who picked three wickets to put New Zealand on top of the game.

However, Manish Pandey, who remained unbeaten in the series so far, rotated strike in the middle as Shardul gave him some pat support in their partnership of 43 runs for the 7th wicket and kept on moving the scoreboard inch by inch. Mitchell Santner, who collected man of the match for his bowling performance at this venue before, looked brilliant in the field by registering three catches to his name.

In the end, India finished with a decent score of 165 on the board with Manish Pandey being unbeaten on 50 while Navdeep Saini added a crucial 11 in 9 balls.

Here is how Twitter reacted to India’s thrilling win:

I'm beginning to think the boundary count was the less cruel way for NZ to end up losing the World Cup final. #NZvInd

Lovely chaps the Kiwis but they are not very good at Super overs … !!! #NZvIND

The series scoreline should have been 2-2. Instead, it is now 4-0 for India.
Incidentally, no side has won a T20I bilateral series 5-0.#INDvsNZ #IndvNZ #NZvsIND

Wow I’m in shock with what I’ve just witnessed for a number of reasons…..

4-0. Drama. Heartbreak again for New Zealand. India just too composed at the end. How good was that push for 2 from Virat! Could do that because Rahul had set it up. 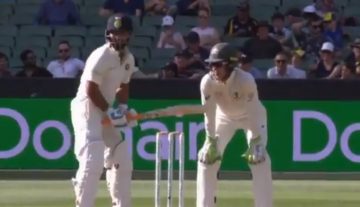