Videos
Pat Cummins Signals Not To Open Champagne And Includes Khawaja In The Picture
By CricShots - Jan 17, 2022 9:13 am
Views 1.3K

Australian Test skipper, Pat Cummins could not have dreamt of a better start to his captaincy stint as Australia registered a 4-0 win against their arch-rivals England in the 2021/22 Ashes series.  Under Cummins’ leadership, Australia did not just retain the prestigious urn but they also won the series with a dominating performance as the hosts comprehensively defeated Joe Root and his men in every game apart from the fourth.

Despite the fact that Pat Cummins had to miss the second Test of the series in Adelaide after coming in close contact with a COVID-19 positive person, Australia won the first three games of the series comfortably and they took an unassailable lead in the series.

Following the third Test, Australia and England witnessed a dramatic draw in Sydney as Australia missed victory by just one wicket on Day 5 but responded strongly with another dominating win by 146 runs in Hobart in the final Test.

However, it is after the conclusion of the fifth Test that Pat Cummins won the hearts of the cricket fraternity with a heartwarming gesture towards Usman Khawaja in the celebration picture with the team. As the Australians were handed the trophy, the players were ready to burst open champagne bottles but Cummins signaled them to keep their bottles away and told Usman Khawaja to rejoin for the group picture.

This might be a small gesture but this is what makes Pat Cummins great. He realised Khawaja had to dip because of the booze and rectifies it. pic.twitter.com/GNVsPGJhfK

Usman Khawaja made a memorable comeback to Australia’s Test squad after three years during the fourth match of the series at the Sydney Cricket Ground as he managed to score a hundred in both the innings of the Test.

With Travis Head returning to the team for the Hobart Test, Khawaja was asked to open the innings with David Warner but failed to continue his form. Meanwhile, Pat Cummins finished as the series’ highest wicket-taker with an impressive tally of 21 wickets in four matches. He took a six-wicket haul in the first innings of the first Test match at Gabba which helped the hosts to start the Ashes campaign on the front foot. 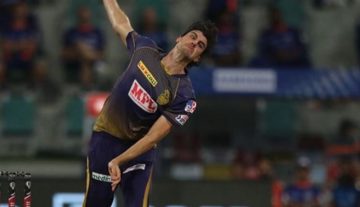