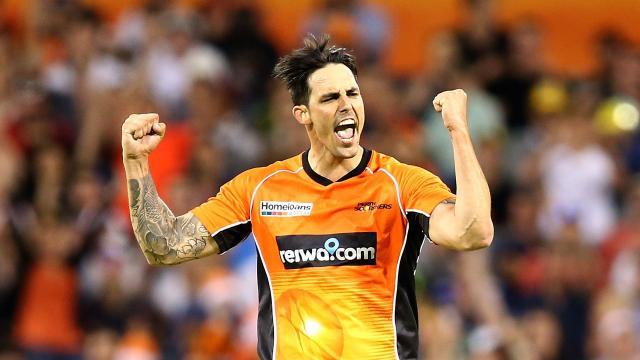 Former Australian pacer Mitchell Johnson has resigned Big Bash League contract with Perth Scorchers. Johnson made his Big Bash debut last year with the same franchise and helped them to lift the title.

The left-arm quick was the pick of the bowlers in last season as he ended the tournament as the third-highest wicket taker with 13 scalps at 15.46, while his best figure was 3 for 3 against Melbourne Stars in the semifinal. Those numbers are the most economical in the history of this league as he conceded his first run on his 18th delivery.

This effort of Johnson helped his side to go through final and lift the championship for a record third time, where they faced Sydney Sixers. Both teams have featured in the final of Big Bash on three different occasions, two of them went in Scorchers favor while Sydney based team is the winner of the inaugural edition of BBL.

He said after signing Perth “Returning for another season is a pretty easy decision when you’ve got a team like the Perth Scorchers. Not only have they played well over the years, but they’re also a great bunch of blokes.”

“If I’m honest and look at what happened last year – winning the BBL title with the Scorchers and then winning the Indian Premier League with the Mumbai Indians – I should probably retire on a high, but Twenty20 is more and more becoming a game that the older guys can play. I also feel like there’s some unfinished business,” added Johnson.

“I want to help the team go back-to-back and, given this is the last season at the WACA Ground, I really can’t wait to get back out there and enjoy the atmosphere the amazing crowd creates.”