Former Australia captain Ricky Ponting reckons that the young pacer Billy Stanlake has the potential to finish as one of the greatest bowlers to have played the game of cricket. In a recent chat with cricket.com.au, Ricky said, “I just love the look of what he’s got. He’s almost seven feet tall, bowls close to 150 kilometers an hour, he can swing the new ball.”

Talking about the youngster further, Ponting said, “He’s got a little nasty streak in him as well – he likes bowling bouncers. When we see him get a bit more of a tank and grow into his body a bit more and put on a little bit of weight.”

He further added, “I think he’s someone that could be one of the all-time great fast bowlers. That’s all there ahead of him, we just hope he stays in one piece and becomes the kind of cricketer we all think he can be.”

Talking about injury issues that come with a delicate body shape, Ponting said: “Billy’s in his early 20s now, just starting to fill his body. I know Cricket Australia have got every intention of looking after him as well as they can and making sure they do bulk him up and don’t break him too soon. Because it’s probably inevitable that those guys are going to have the injuries early in their careers.”

Ponting is confident about the workload of Stanlake

Ponting feels it is for the specialists to check the workload of the Stanlake. He said, “I’ll let the experts make those calls on where his loads are at and that sort of stuff. I know coming out of the Big Bash and even being around this group, we’ve been trying to pump his loads up to get him to bowl seven or eight overs a day. But I’m sure if there’s an opportunity for Billy to play a Shield game at the back end of the season, I think we’d all be silly not to let him have that opportunity.” 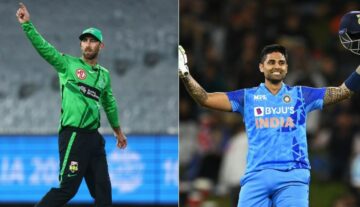 News
By CricShots - Nov 23, 2022
Glenn Maxwell Feels BBL Will Not Be Able To Afford Suryakumar Yadav