The veteran Indian spinner, R Ashwin had an underwhelming start to the 2022 T20 World Cup and took just 3 wickets off the first 4 matches of the tournament. Regardless, the 36-year-old spinner made a strong comeback by scalping 3 wickets for 21 runs during the the match against Zimbabwe on November 6. During toss time, R Ashwin was part of some weird footage that didn’t get much attention during the live broadcast.

The Indian skipper, Rohit Sharma was seen giving a team overview to the interviewer after having won the toss and electing to bat first. The Zimbabwean skipper, Craig Ervine left the camera scope to let Rohit take the centre stage for the proceedings. However, in doing so, Ervine exposed Ashwin.

In a hilarious incident, R Ashwin was looking confused between the 2 jerseys (jackets) that lay on the ground. Upon not reaching a conclusion after looking at the jerseys, the veteran spinner decided to go with a weird tactic to identify his clothing. The Indian off-spinner sniffed the sweat on both the jerseys one by one and then dropped the second jersey back on the ground, perhaps because it smelled worse and wasn’t his.

R Ashwin has clarified the viral video going around, where he can be seen sniffing jerseys in order to check which one is his. He tweeted: “Checked for the sizes to differentiate!❌ Checked if it was initialed❌ Finally 😂😂 checked for the perfume i use✅ 😂😂 Adei cameraman.”

Checked for the sizes to differentiate!❌
Checked if it was initialed❌
Finally 😂😂 checked for the perfume i use✅
😂😂
Adei cameraman 😝😝😝😝 https://t.co/KlysMsbBgy

Earlier, former Indian spinner, Harbhajan Singh has taken a cheeky dig at R Ashwin’s viral video where Ashwin can be seen sniffing his clothes during the toss ceremony in India’s final Super 12 encounter against Zimbabwe in T20 World Cup 2022.

In the video shared by social media users, the Indian skipper, Rohit Sharma was speaking to Ian Bishop during the toss. In the meantime, Ashwin was seen collecting his jersey from the ground. Finding a couple of similar jerseys, he sniffs both and after identifying his own, he throws the other one down and leaves.

ALSO READ: Rohit Sharma Sustains A Huge Blow In Nets Ahead Of The Semi-final Clash

In the match, Suryakumar Yadav played a match-winning knock of 61 not out off just 25 balls as India finished with 186 for 5 in 20 overs. In reply, Zimbabwe eventually got bundled out for 115 in 17.2 overs, with Ravichandran Ashwin returning figures of 3-22. In reply, Zimbabwe struggled to get going against India’s pacers. Sikandar Raza put up some resistance with 34 off 24 balls before he was out-caught off Pandya. 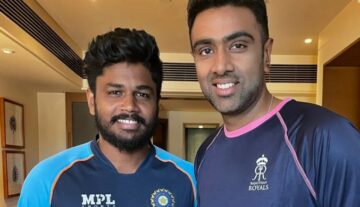