2003 was the era of utter dominance and talent for Australia’s cricket team.  The Aussies had by far one of the best squad since in the world during the beginning of 2000. The boys in yellow defined the fearless and winning attitude of the Australian Cricket which made them legends of the game.  2003 was one of the best times and performances by the Indian cricket team during the World Cup. With Sourav Ganguly at the helm, India’s stood a chance of lifting the World Cup trophy once again. Sourav Ganguly did an excellent job riding the Indian team into the WC finals.  Although India faced a difficult challenge as they were against mighty Australia lead by Ricky Ponting. Ponting smashed India s 20-year-long wait of a World Cup smashing a terrific hundred in the final take it WC trophy away from the Subcontinent team.

India’s skipper Sourav Ganguly took everyone by surprise as he decided to field in the finals at Johannesburg on a flat belter pitch. Ganguly must have instantly regretted his decision as he paid a heavy price for it. the Australian openers scored 15 runs in the first over in what was a small teaser of the carnage the Aussies were about to shower on the Indian bowlers. Openers Adam Gilchrist and Matthew Hayden put up a century stand before losing their wickets as the scoreboard reading 125-2.

Ponting and Martyn batted in the best of their abilities at the biggest stage possible earning themselves the title of legends at the game. The duo hit the Indian bowling attack all across the park as the ball touched every blade of the pitch, driving towards the boundaries. They stitched up an unbeaten 234-run partnership to which is one for the record books.  Ponting took 74 balls to score his half-century and from there, the Australian skipper exploded like a bomb. His next 50 runs came off 28 balls. Ganguly tried all part-time options in  Sachin Tendulkar,  Virender Sehwag, Yuvraj Singh, but all the tricks went in vain. Riding on Ponting’s 140, Australia heaped up a mammoth 359 for 2 in the World Cup final.

India s hopes of chasing down this total rested heavily on the shoulders of  Tendulkar. The little master had amassed 669 runs in the tournament so far.  Australia’s pace attack got the better of Indian players and Brett Lee got rid of Indian skipper leading the scoreboard to  59 for 3.  It seemed all over for India but hopes arrived in the form of rain. Ponting brought the spinners in to rush through the 25-over mark.  It did not help Ponting as it rained heavily and play had to be stopped. This means, If there was no play, the match would be resumed the next day. After 17 overs, India had reached 103 runs with 7 wickets in hand as India required 257 from 198 balls in the final.

But unfortunately for India, the skies cleared, and play resumed. Sehwag continued the fight but was run out for 82 off 81 balls. Dravid missed his half-century by 3 runs after chopping on the ball back onto his stumps. India’s middle order of Yuvraj, Mongia could carry on the momentum. McGrath cleaned up the tail in his second spell and ended with figures of 3 for 52. India was bowled out within 40 overs with just 232 on board as Australia marked a comprehensive win and be crowned World champions for the third time. 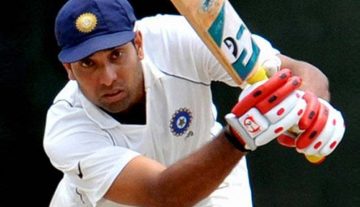