17 years ago, India suffered a humungous loss by 125 runs in the ICC World Cup final against Australia in Johannesburg. However, on Monday, Ricky Ponting, the former Australian captain, took to Twitter to share the image of the bat which he used in that very game against India.

Posting the picture of the match, In the tweet, Ponting says, “Given we’ve all got a bit of time on our hands as we stay at home, though I’d go through what I’ve kept from my career and share some of it with everyone on a regular basis- this is the bat I used in the 2003 World Cup Final”. In response to his tweet, Indian fans came out all guns blazing at Ponting and accused him of having a spring in his bat.

Given we've all got a bit of time on our hands as we stay at home, thought I'd go through what I've kept from my career and share some of it with everyone on a regular basis – this is the bat I used in the 2003 World Cup final. pic.twitter.com/meoBP6NJvg

The question originates from an observation that Ricky Ponting had a spring in his bat, allowing him to hit the cricket ball a long way. One fan took to Twitter and wrote, “Cut it open we Indians think it has springs in it”. Another user in his tweet said, “Every Indian from the ’90s will be searching for the spring in the bat”.

Ricky played match-winning innings of 140* off 121 balls in the 2003 World Cup Final. His innings was studded with 8 sixes and 4 boundaries which helped Australia reach 359 in 50 overs. Replying to Ricky Ponting’s tweet, ICC also shared a clip from 2003 final which Australia won by 126 runs against India.

the blade in action 💥 pic.twitter.com/wRgLIl3lAi

Cricket has come to a halt across the globe much like other sports because of the coronavirus threat around the world. All major sporting events from the French Open to the Euro Cup have been postponed as a precautionary measure.

Indians fans were given a trip down memory lane and had some interesting replies to Ponting’s bat.

So, this is what ruined the dreams of 1 bn people back then 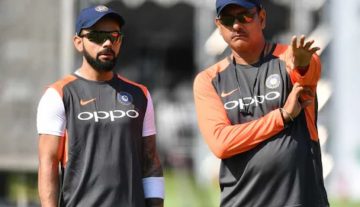